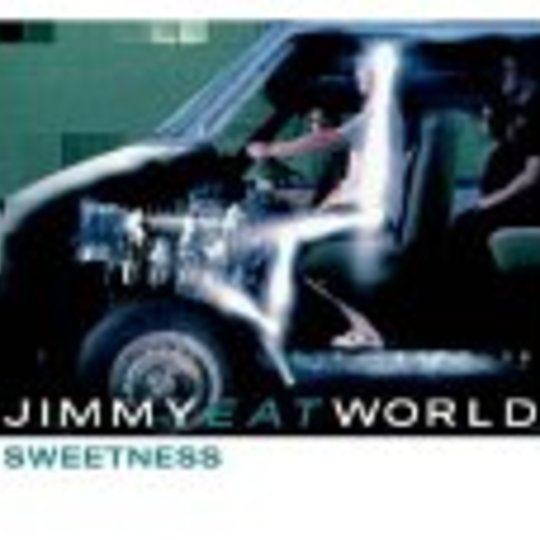 What the _heck???? _I yelp as Jim Adkins’ tender yearning earnestly opens this, Jimmy Eat World’s forthcoming single from 2001’s highly acclaimed 'Bleed American’ album. Giving a worryingly prominent, reverb-enhanced nod towards Chesney Hawkes in the opening line to the song before a _who-oh oh-oh-ooohh _introduces an aggressive guitar bomb that announces their presence, Jimmy Eat World certainly seem to be heading for foreign lands with this 3 and a half minute blast of emotional power-metal.

But, having not yet grown accustomed to the aforementioned Gold-selling album, I’m probably more used to their more delicate emo-style of emo. If ya get what I mean. For it has to be said that if you were to replace Adkins’ vocals with that of a more peeved nu-metal character then the guitar work would quite happily accommodate his irate barking. It’s the kind of loud distortion that *‘A’ *seem to have become rather fond of but which, despite my apparent complaining does actually give JEW a bit of oomph.

I could say that ‘Sweetness’ sounds like Chesney Hawkes jamming with Papa Roach, but that’d be unfair on JEW. Instead I’ll say that ‘Sweetness’ is an irresistable hearltfelt track with loud, cursive guitars that’ll weave a wicked Jimmy Eat World spell on your soul. Erm… and hopefully you’ll buy the album too.