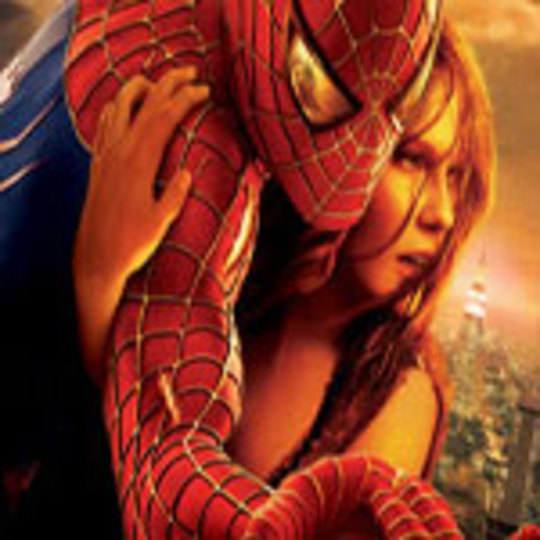 Don't be fooled by the misleading trailer. This is not just another Boy's-Own action movie, but rather a brilliant piece of storytelling that takes the already perfectly-formed first Spider-Man film, fleshes out the characters even more, and in doing so becomes possibly one of the best all-round blockbusters I can think of in recent years. Perhaps it's because unlike recent cinematic heroes like Russell Crowe's Maximus, Peter Parker is a vulnerable everyman, and the strength of this film is that it is essentially a character piece where each person has their own stories to tell, their own motivations and vulnerabilities, and the actors, especially Tobey Maguire in the starring role, and Kirsten Dunst as Mary Jane, are superb. Sam Raimi's vision of Spider-Man requires a performance heavy on nuance and subtlety to work the audience's emotions so they really care about the character, and Maguire plays it to perfection. He's the ordinary guy, living in a tatty bedsit, having a hard time making the rent or keeping down a day job, but somehow that makes his deeds as Spider-Man more heroic. It would have been so easy to make a standard action film with 2D comic book characters, but instead what Raimi has made is a film about how our hero interacts with the rest of the world, his immense difficulties in maintaining relationships with the people he loves, and how he is judged by the people around him. Alfred Molina puts in a great performance as super-villain Doc Ock, another scientist who evolves from a decent person into a troubled madman, just like Willem Dafoe as the Green Goblin in the first film, and James Franco is great as Parker's schoolfriend Harry Osborn, loyal to Parker, but twisted up with thoughts of revenge against his alter ego... You even care about the bad guys in this film! The actual action scenes are a relatively small part of the story, but they are executed with just as much personality, imagination and flair as the other elements, up there with watching Uma's half-smiling swordplay in Kill Bill. It ends up showing up the rest of the CGI pretenders for the hollow soulless entertainment they are. Here we have a film underpinned by a real passion for the subject matter. Dare I say it... it's made with love. I think it is the director's best ever work.

Everything you could want is here...sometimes the film is madcap funny, with J.K.Simmons soooo good as newspaper boss J. Jonah Jameson. Sometimes it just takes the piss out of itself, without ever descending into spoof. There are some great moments that I don't want to reveal and ruin for you (look out for Raimi stalwart Bruce Campbell in another great cameo), and sometimes the film is complete edge-of-the seat excitement, with some truly headspinning fight sequences and chases , then the next moment it's romantic and tender, with some of the face-to-face scenes with Maguire and Dunst a masterclass in screen underacting. Spider-Man 2 somehow manages to be as uplifting as Peter Weir's Dead Poets Society in the way it deals with the nature of heroism, and then as exhilarating as Spielberg's Indiana Jones films when it comes to the actual heroics.

I'm gushing. Try not to read too many reviews, because it's better to know less detail about funny moments and stuff... let it be a surprise, let the film make it's designed impact, let it manipulate your emotions and send you spinning out at the end. This is what blockbuster movies are here for...enjoy!