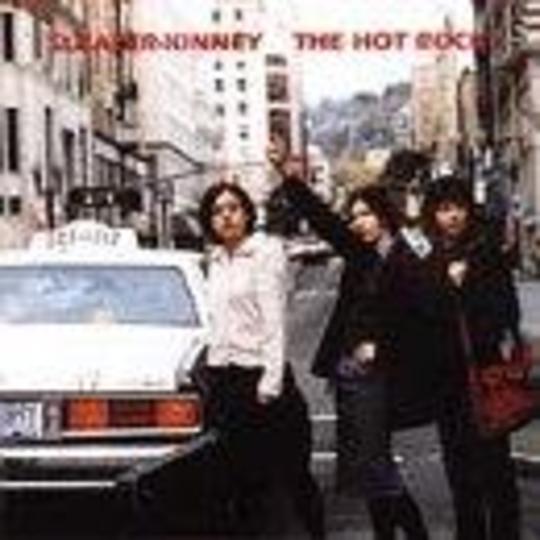 Its that BAM! Moment. Your mind spinning in a million possibilities of love/hate letters you should be writing; of jokes you could have told if you were perhaps slightly more witty. Argh, it's everything going on. It's why I had to stand up, and walk around, and flail my arms everywhere in the middle of typing this. Last time, I was aged fifteen; I found out that Melissa Joan-Hart had been banned from film-sets for 'being a nymphomaniac'. This time, it was on my bed in the dark, Sleater-Kinney’s 'The Hot Rock' in my headphones. Midway through, when I realised just how good what I was listening to actually was. Twice. And then once in the morning.

This, their follow-up to 1997's 'Dig Me Out', apparently lost them a few fans. It was 'too experimental'. Tsk, when will people get it? Carrie and Corin’s twin-vocal dabblings on previous albums are taken to an extreme here, most notably on 'Burn, Don’t Freeze'. One of the most sublime pop moments of the 90s? I’d say so, boy. _"I’d set your heart on fire/but arson is no way to make our love burn brighter."_ Oh, but it is. By the chorus, Corin's patented vibrato yelp is backed perfectly with Carrie's teasing, sugary, "Fire – Water – Baby Baby’s putting me out." Maybe it’s all in the timing. We need enthralling!

I’m not sure if you’ll remember, but a few years ago there was a little kerfuffle caused by a certain millennium bug. The Earth was doomed, we were told. And yes, it’s dealt with on here. [_"Nasty little bug/much work to be done/Eats all the numbers up/We’re 00 gone"_]. You really do not want to break the news to them that, woops, nothing happened. Why would you, when you can stay with them frozen in time, and forever party like its nineteen-ninety-ni-i-ine? The guitar work takes another step forward from previous albums. Perhaps if I was more of a music-business type I could call it angular. But I’ve never quite been sure what that means. I do know, however, that the guitar here remains very much in the Sonic Youth/ "Who the fuck taught you to play?" field. Inter-weaving, battling guitar lines cross in and out of the vocals. It’s the tiny changes in rhythm, the momentary silences. It’s the fact there is never a "guitar solo". It is just incredible. As Manchester’s Valerie put it, "Carrie, you were my guitar She-Ra."

There are so many little things on this album. The moments of utter perfection you wait a whole song for; the moments when you know that everything is as the world intended. "I hit the mark! I target moon, I target sky, I target sun." Only when you listen to these albums, and read their interviews, do you realise just how intelligent the three women really are. How passionate. Yet with such humour and at times care-free happiness. In truth, Sleater-Kinney are, on this album, and in fact to this day, everything that is right with the music scene.

I recently saw a mixtape; through the playlist it progressed from first sight, to infatuation, and finally to love. The final song, the track chosen as the most affecting love song, was in fact the closing track on this album, _"Quarter to Three."_ It was perfectly chosen. It’s the sort of song that would make Melissa Joan-Hart sick. Lest we forget, Melissa’s last foray into the music world was a Britney Spears video. Learn to feel, learn to implode with joy. They are here if you want them.