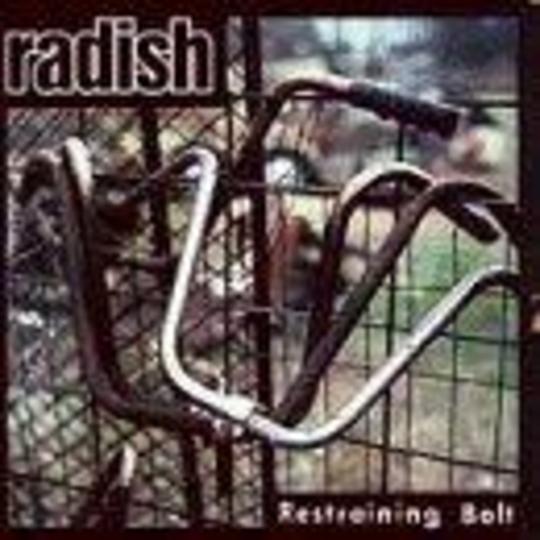 In the music world there are two main agents at work. The first is the creative genius of its stars; the second is the cynical relationship between the record companies and the music press. Normally, unfortunately, it is the latter of the two which determines the success of a record.

What happened with Radish's one and only album, 'Restraining Bolt', was this: Ben Kweller, a young man with the youthful musical energy that made him a sort of American Tim Wheeler, wrote a song called 'Little Pink Stars', which led Radish to be embraced by the music press as "the next Nirvana". Now, we've seen this happen with many bands, from Bush to My Vitriol, and every time it happens, it places an unfair burden on the shoulders of the poor musicians who are trying to honestly release the best music that they can. In the case of Radish, it caused disaster. Once the media had built up the hype surrounding this "next Nirvana", all that was left was for it to brutally smash the band's hopes of success. The album came out, followed by second single 'Simple Sincerity', and the press was ruthless. The records were slated by virtually everyone, almost solely on the basis that the band was not living up to its reputation. Ironically, that very reputation had been almost entirely the product of that awful correspondence between a record label and the music press which creates the sort of initial hype that can only be disappointing when push comes to shove.

Push did come to shove, and Radish showed with their album that they were not the next Nirvana. In fact, they were better than that - a band with its own ideas, that wanted to do something honest and new. Kicking off with the perfect pop song, 'Little Pink Stars', 'Restraining Bolt' is a piece of sugary pop rock that is fuelled more by the then 16-year-old Ben Kweller's youthful naievety than by anything else. Tracks like 'My Guitar' and 'Sugar Free' are reminiscent of Ash's early material - the sort of thing that can only be written by a teenager, or someone with a teenager's heart. There is something very special in the honesty and simplicity of teenaged bands who are doing it for the music rather than for the money, that cannot be replicated by their either cynical or jaded elders, who perhaps know too much about life or too much about record sales to create the sort of music that simply rejoices in loud guitars and happy melodies. For this very reason, Radish's 'Restraining Bolt' is invaluable as a reflection of a young person's psychology.

But even the young have their intricacies, and this album reflects the darker side of the coin just as much as the happy, jangly, rocky moments. The latter half of the record displays a more 'mature' side to Kweller's temper, with 'Still I Wait' and 'A Promise' sliding from shade to shade, contrasting sharply with the simplicity of some of the earlier numbers. The highlight of the record (for this writer, at least) is 'Apparition of Purity', a mid-tempo ballad that displays not only the raw emotional value of Kweller's untempered vocals, but also a songwriting genius that makes this track perfect for those down-hearted moments when all you want is a piece of music reflecting your despondent emotional state, that you can sink into and wallow in for a time. Many of the songs on this album indicate that commonness of human experience that make it possible for different people, all across the globe, to identify with their sentiments.

It seems a travesty, then, that the cynicism of the 'industrial' side of the music world destroyed, for many, the emotional capacity of this record. Many of those who bought the record, regardless of the press's verdict, will testify that this record was the soundtrack of some important moments in their lives; while those who blindly followed what they were told by the magazines will tell you that Radish are shit, regardless of the fact that they have never actually listened to the album.