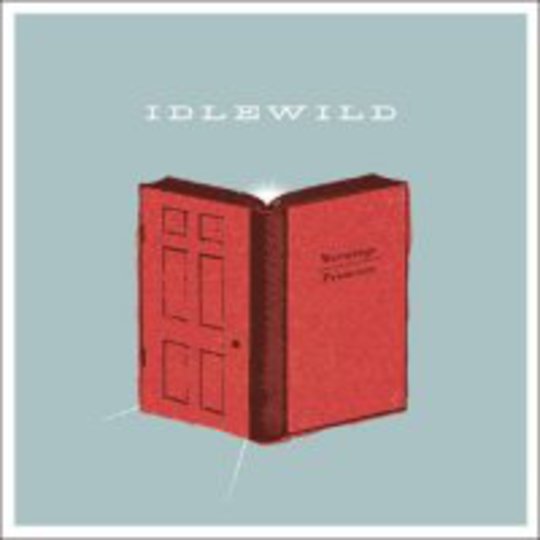 So much promise. So many warning signs. A decade into their career and five albums down the line, the restless stirrings of Idlewild are clear; they are too big for their mid-sized pond, the world wants big, epic rock with emotive lyrics and massive pathos, and Idlewild are here to offer such things. It’s the way it’s been going for five years, and you all know it, so please, no muttering at the back, rock kids. If you really hated the soft crap the last album, then there’s no point reading this review. You know what’s going to happen here.

…but if you’re still around, I guess we can offer you ‘I Want A Warning’; a brief, tantalising nod towards decade-ago Idlewild, with skewering guitars and a simple mantra of “I want a warning”. It’s pretty much as close to the past that the unreformed ‘wild fans will get from ‘Warnings /Promises’.

Now to the present day. On their previous LP ‘The Remote Part’, Roddy Woomble and Co. found themselves bedevilled by oft-mentioned comparisons to REM. The hope (or fear, depending on how you’re pre-disposed) it seemed, was that Britain was finally set to offer a major-label folk-rock answer to the former quartet from Athens, Georgia. Therein, it’s not too surprising to hear that the opener and returning single ‘Love Steals Us From Loneliness’ is a stately bluster and that the “happy birthday” payoff is pure Stipean lyricism. Equally, ‘I Understand It’, one of the better songs from the LP’ is a prime slice of REM ‘Document’ era chiming guitars and clear from murky-origin vocals. ‘El Capitan’ is a little more strident and thoughtful, complete with oblique references to bringing your camera (another REM reference, fact spotter geeks). It swings between single-note piano gossamer-lightness and thundering anthem.

Before that though, ‘Welcome Home’ is all keening guitar and gentle swells and a more than enjoyable entrance into Idlewild mk.3. But it begs the question; where Roddy, is home? Unsurprisingly, it’s now across the Atlantic. ‘Not Just Sometimes But Always’ gives us a peek at Woomble's new, East Village, NY listening habits. Drenched in Americana, it’s the sign of maturity that overtakes all portentous musicians at some point.

And while there’s certainly a progression of style, there’s also much to link to the band’s previous pair of albums ‘As If I Hadn’t Slept’ re-traces much-followed Idlewild chords, lyrical themes and despite the debut of steel pedal (re-introduced on the lovely penultimate track ‘Disconnected’) on an Idlewild record, it could have fitted on either of the two preceding LPs.

There are peaks though; ‘Too Long Awake’ is a glorious, towering song that unfurls into a imperial, pathos-laiden chorus laid on a bed of disonnant e-bowed guitars, yet brutally and tantalisingly cut dead just as it promises to peak at the summit of a white noise mountain. Yet for every ‘Too Long Awake’, there’s a ‘The Space Between All Things’ which is a shapeless dirge. It’s all infuriatingly inconsistent.

Plus (oooh, infuriation) there’s still an annoying element to Woomble’s now standard oh-so-clever-yet-not juxtaposed/contradictory/double confirmatory lyrics; a sense that while he attempts to move his band into the big leagues, he’s not been able to climb beyond a lyrical plateau he reached somewhere during ‘100 Broken Windows’. Words such as “Together we're younger than you are / Forever you're older than we are together” grate (especially when you realise that the second half of the couplet is an obvious restating of the original line). It’s that desire to stay the same yet be different that clips Idlewild’s wings, leaving them chained to big theatre venues like the ravens to the tower. Hang on, is that a Woomble lyric?

It could have been different though. Closer ‘Goodnight’ is one of the more adventurous tracks on the record, and it bathes itself in a luxurious, slo-core glow. A portent for what could have been if the band had freed itself from the confines of stultifying self-importance and grand expectation

‘Warnings / Promises’ is the work of a band pushing itself to the limits of its generous, but ultimately not boundless musical ability. The desire to soar to the heights and write an album of such landmark size and scope has finally stripped the Icarus Woomble of his wings.