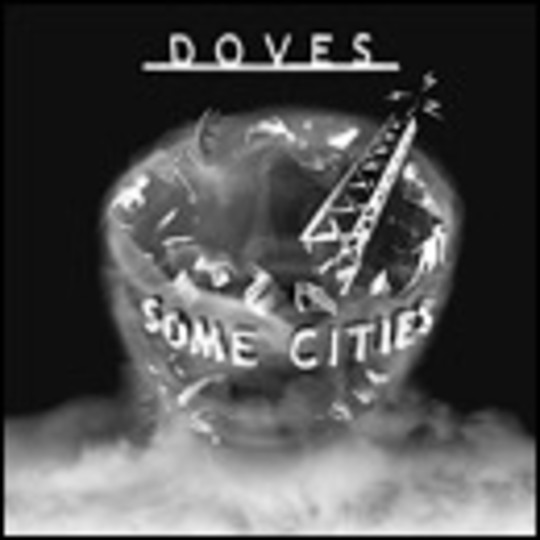 “Good ta, how was the world tour?”

“Excellent, but it’s good to be home.. hey, where’s the laundrette?”

“And the fruit and veg store?”

“oh that’s the Verb Café now. Best espresso this side of Wigan_”.

…and that’s largely the scenario that faced the Doves on their return home following their post ‘The Last Broadcast’ journey round the globe. A strange and unsettling scenario whereby your world has moved on without you and left you standing confused, idolising your dingy past for fear of a neon future. That’s ‘Some Cities’ for you…

Of course it’s not a concept album per se, but it certainly carries a central theme; alienation, recourse to old ways and a general state of detachment. It can be sensed purely in their geographical song titles; from Snowden to Salford. Musically too, the band have settled into a firmly established path of post-Northern Soul hubris, with single ‘Black And White Town’ being the ultimate distillation of this.

Yet the band haven’t sunk into mere musical formalities: The Goodwins & co. have used ‘Some Cities’ to push themselves to the limits of their musical remit. See how the beautiful, keening guitars of ‘Almost Forgot Myself’ show that Doves can match stadium rockers ballad for ballad. Yet the operatic grandeur levelled by the earthiness of lyrical content – “Hey man, can you help me out?“ of ‘Snowden’ twists the question on those who doubt – who can match this?

Some of the radio-friendly oompa of ‘The Last Broadcast’ has been cut back, and the new record bears more resemblance to their debut ‘Lost Souls’ in its ashen-faced detachment and bloodied-yet-unbowed pride. There is_ ‘Walk In Fire’ though, which uses the same tricks as the last album’s ‘There Goes The Fear’ to create a euphoric explosion of emotions. It’s a very good trick. The refined grandeur of _’Sky Start Falling’, with its stop-start, slowly building enormity, matches it in skyscraping presence too.

All the time though, there’s mournfulness, a gravitas that offers recourse to glib coffee table CD adjustment. Doves require an emotional investment. Doubtless to say, it’s a rewarding, if draining one. Songs like the sparse, gentle ‘Someday Soon’ and the ghostly lullaby of ‘Shadows of Salford_’ are remorseless yet engrossing offerings; a hard shell with a damaged centre.

So are the Doves happy? No. But if they were, you doubt that they’d be able to muster such an outpouring of musical catharsis. And though it may be gentle and frequently maudlin, it is no doubt a release to spend 50 minutes with this record. ‘Some Cities’ may not be a summer record, but it might quite possibly be the record that gets you through it.