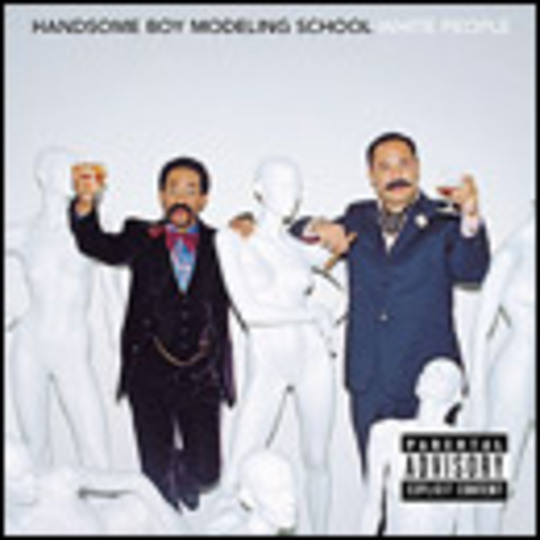 Five years on from the critically acclaimed hip-hop-as-a-finishing-school concept ‘So… how’s Your Girl?’ Dan the Automator and Prinse Pawl have resurrected the indie hip-hop genre, grappled from the cold, dead hand of the Gorillaz. ‘White People’ contains many of the same reasons ‘…How’s Your Girl?’ worked so well. The collaborations are diverse (Alex Kapranos, Pharrell Williams, Mars Volta, Rza, Mike Sinoda and Chester Bennington from Linkin Park, Jamie Cullum, Chino Moreno and Kid Koala to name just a few.), the skits are genuinely funny and in Del The Funky Homosapien, HBMS have their star pupil.

At various points this album harks back to its predecessor, particularly with the album opener, but it also covers much new ground, such as ‘The World’s Gone Mad’, the jump off single; a cod-reggae beat featuring Barrington Levy, with Del the Funky Homosapien and Alex Kapranos sharing vocals.

The real gem on this album rears its head halfway through. ‘Breakdown’ is the bastard child of the ‘Graduation Song’ and a lullaby I recall from my youth, but despite that Joe Jackson manages to fashion a precious stone from a piece of coal.

After that it’s back to the hip-hop game that the handsome ones do so well. Tracks like‘It’s Like That’, ’Rock and Roll (Could Never Hip Hop Like This)’ and ’The Hours’ are straight up old-skool hip-hop which borrow heavily from The Roots, Deltron 3030, and some of the better parts of the aforementioned Gorillaz.

The closing quartet of tracks are some of the best down-beat tracks from the genre, with Pharrell Williams teaming up with Julee Cruise on ‘Class System’, and the wistfully beautiful ‘Greatest Mistake’ featuring Hobbit on Day Release, Jamie Cullum, who somehow manages to not turn the closer into a pissed-up free-form jazz evening.

Although White People doesn’t break any of the barriers ‘So…How’s Your Girl?’ did, it is none the less a graduation. Although collaborations will always be its stock and trade, this year’s crop of Handsome graduates more than make the grade. Step forward to receive your diploma.