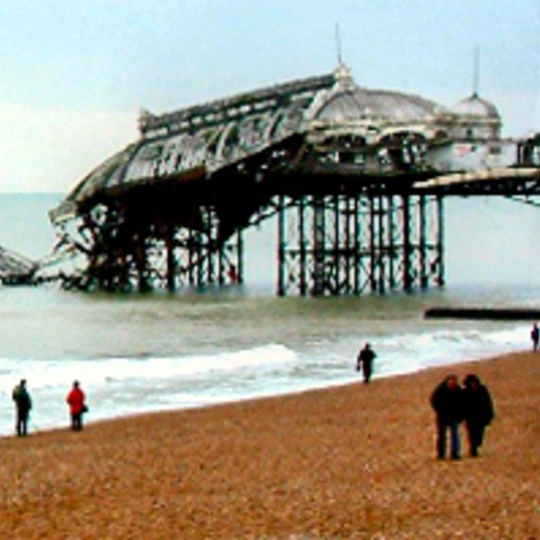 Well whaddya know? It’s been a couple of years since Brighton became the spotlight for a swathe of various alt.indie masters (hello BSP, ESP, TEMBD), prompting numerous presshounds to question what was being filtered into the pipes ‘round Pier way this time. Thing is, an unsigned bands night was being established around the same time called Cable Club, and now two years later they’ve delivered their second compilation of demo talent to prove that ‘London Mk II’ is still delivering.

And there’s little evidence more effective of how thriving the Brighton ‘scene’ is. Proceedings kick off with Turncoat’s ’At A Window’, which is as promising an opener as you could hope for. It’s a climactic and sonically overwhelming tune, the stargazing version of today’s (or in this case tomorrow’s) Moz-indebted plonky-punk but twice as skilful and ninety-six times more exciting. It also makes up 50% of the tracklisting for a demo which you can read about over here. Almost immediately the variety of styles is evident as next up is the My Luminaries number ’A Man Without His Phone’, a distinctly pop effort like Phoenix with extra melancholy, and a riff that gives a rather refreshing nod to Jackson 5’s ‘ABC’. It’s followed by ‘Sugar The Pill’, a vari-speed guitar masterclass by The Customers in how to write an anthem and yet be subtle about it, in a mumbling Cure sort of way.

As you can tell, highlights are nigh-on impossible to pick out from the 19 tracks on offer – as much due to the diversity of the music as to how bloody marvellous each song is. Admittedly the bulk of the compilation focuses on all things rock-shaped, from the shouty lo-fi punk of Fuji Heavy to the, er, shouty hi-fi punk of Nectar International, and from the chanty, slightly angular The Rivers to the hazy folk-pop of Bluesky Research. There’s also a welcome variety of influences too, most of them echoing more recent sources of inspiration: Brown Corduroy Express sound like The Cooper Temple Clause with a sunnier disposition; Fans Of Kate have Goldrush-hinting piano balladry; County of Analogue are like a high-tempo Beta Band; The Small echo ’Great Eastern’-era Delgados, all twinkling chimes, mournful strings and dramatic kettledrum. But this isn’t about carbon copying, as you get the sense that some of these bands may be (hopefully) prototyping, or at least proving to have power and spirit that other bands should aspire to. One of the most fervent regulars Villareal chip in too with a not-so-loud-as-we-usually-are take on ’Banana Skins’, strumming whimsically (in this case a good thing) during a tale of how smoking the biodegradable slapstick-enhancing item in question won’t get you very high at all really.

To think that we haven’t even ventured much beyond the guitar-affiliated genres, the only real exception being the closing track by Mr Leggs that samples Austin Powers, throws on some lovely orchestral bits and harks back to the heady days of trip-hop. This compilation _is_ proof of an ever-healthy South Coast underground, and we wouldn’t be surprised or displeased if it didn’t remain a well-kept secret much longer. Well done ver Club, that’s the way to do it.