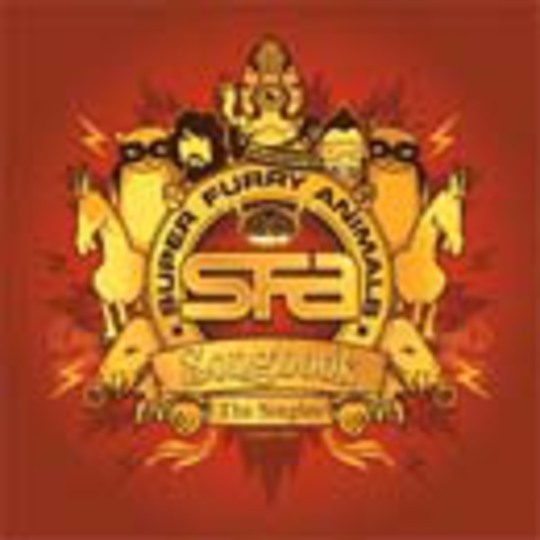 You probably don’t need me to tell you that the Super Furry Animals are arguably the most inventive, innovative, eclectic, consistent and quite simply bloody fantastic forces that British music has seen in at least the last decade. So it really is quite worrying when the group decide to release what is essentially, no matter how it is disguised, a ‘Greatest Hits’ package. Only last year, in interviews to promote sixth opus ‘Phantom Power’, the band stated that if the mere suggestion of a Greatest Hits was put forward by any of them then they’d call it a day; it would feel like a sign of desperation, of admitting that the ideas have dried up. That’s a worrying thought indeed. It’s more worrying to realise that it’s actually happening. Is there really nowhere else to go?

Perhaps such questions should be postponed until the new album. Thing is, does that make ‘Songbook Volume 1’ a stopgap record insisted on by the record company, ‘The Man’ who presumably don’t give a fuck? Not that it would matter really, unless it hindered their creativity – the Furries aren’t a band whose fans would accuse them of 'selling out', 'cos it would only mean making more money to spend on further oddball experimentation anyway. Previous directions that the band have taken have always ensured that they’re in a field of their own far away from much that is remotely conventional or predictable, Top 40 success or otherwise. This isn’t ‘Forever Delayed’, after all – the ideology seems closer to ‘50,000 Fall Fans Can’t Be Wrong’ in that it uses genuine ‘hits’ as an anchor to creating an introduction for the curious or the previously ‘misled’ (no new material here, you’ll note).

Nope, the one major quibble isn’t about the motives, it’s about the tracklisting. It’s all very well to sit here and say that they should have included ‘Guacamole’ and that ’Mwng’ is under-represented even though it got the lads a mention in the Welsh parliament, but that’s all futile in its subjectivity. Go compile your own twenty-one if you feel the urge. But with lack of a chronological set-up and no set genre, the running order seems a bit too much like the lottery-system they once fleetingly relied on to choose which song to play next at gigs. It’s hard for a back catalogue that relies so heavily on albums as their own entities to become useful chart comp-fodder. Granted, the Furries have become most synonymous with lateral lyrics and psycho-delic pop, but is the strident indie-punk drug-ode ‘Something For The Weekend’ followed by folk-tinged, melancholic, age-concerned protest song ‘It’s Not The End Of The World?’ really the best way to introduce them? Perhaps as an example of their variety it is, but in terms of being cohesive from the outset it may be all too shambolic.

Do not fear though, all such doubts become worthless nit-pickery once you’re reliably (re-)informed that SFA are an exceptional, if not unequalled, singles band. All the greats are here, the tales of dogs, satellites, alien invasions, Capitalism, Newton’s love of gravity, war, weather and Einstein’s parents. From the euphoric brass sections (‘Northern Lights’, ‘Demons’) to samples of ‘Carmen’ (‘Slow Life’). From Welsh wordplay (‘Ysbeidiau Heulog’, ‘Blerwytirhwng?’) to idiosyncratic love songs (‘Juxtapozed With U’, ‘Fire In My Heart’). From the guitar-laden sugar rush (‘Do Or Die’, ‘God! Show Me Magic’) to more f-words than you can shake a member of the Osbourne family at (‘The Man Don’t Give A Fuck’). Each track a shining, superlative example of kitchen-sink pop. Plus ‘Ice Hockey Hair’ could be the most perfect thing you’ll ever set ears upon.

They never seemed like ones for nostalgia, but I defy you not to feel highly inclined towards tanks that spew nosebleed techno, inflatable pandas, volcanoes with eyes and the like. Compile my own twenty-one? Perhaps, but it’d be nowhere near definitive. I’d rather go and listen to their entire back catalogue again, which means that for me ‘Songbook’ has achieved what it set out to do. Behold the SFA, ye mighty, and bow down.