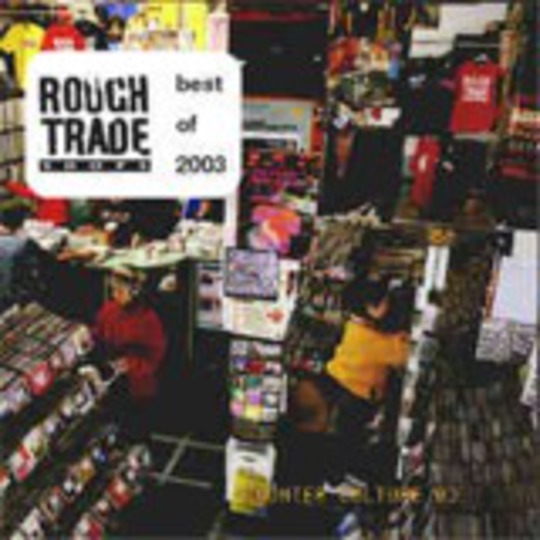 Not having visited the Rough Trade shops for the best part of half a decade (us Soho-ites prefer the Berwick St march), it's nice to preserve the image of a musty little shop, carrying all manner of wax gold, everything in limited edition, and perhaps Morrissey popping in occasionally for a cup of tea and quick chat about the latest New York Dolls live bootleg.

In reality, Rough Trade is probably like the local indie emporium in your town (ah, the blessed Parrot Records of Canterbury, the setting for my very own Uni-based High Fidelity), only with more Evisu and Carhartt clogging up the place. Regardless, the Rough Trade name carries some weight amongst us indie-inclined folk, and in recent times, the label has been quick to emphasise that in recordular form, with some excellent results (the Rough Trade Country compilation - brilliant) and some not so-great-efforts (that whole Post Punk CD - very patchy, though maybe that's the point).

Predictably, a bit of both. Split over two CDs, these 45 tracks are split into two categories; raucous (rock, extreme electronic noise nutters) and not raucous (gentle folk, pastoral bleeps and country soul indie).

CD1 (doesn't go booom) is probably more erratic, but equally contains the most gems. Among those are Joy Zipper's 'Check Out My New Jesus', a nice slice of stoned smooth electronic indie soul, **The Trachtenburg Family Slideshow Player**'s 'Eggs', which is a gently rocking paen to the constituent ingredients to omelettes, with some nice pre-pubescent backing vocals, and Mates Of State's 'Nice Things That Look Good' which sulks in like a laptop-enhanced Belly. Other highlights are the Concretes' 'New Friend', which is the best Velvets song of the year, and White Stripes mates Blanche, with the country pop of 'Who's to Say'. Throw in the innate wonderfulness of Richard Hawley and The Postal Service and you're away.

CD2 (RRRRRRRAAARRRRR) is largely split between guitar RAWK and horrible avant-noise bollocks. Not all avant noise is bollocks, obviously, but you'd be forgiven for thinking otherwise with the likes of Die Montir Batss' '_Spread Your Legs, Release The Bats_', and the utterly tiresome Fat Truckers, although credit to* Some Product*'s 'Sid Vicious Is Dead' for managing with aplomb what the exotically-named Les Georges Leningrad fails to do: which is create an inspired DIY shouty electro drunge. Established slinkglitchers Miss Kittin and Peaches make figurehead appearances, though their efforts, especially the latter's 'I U She' only makes obvious the reduced quality of the rest. The Kills' filthy blues rock is far more amenable, and 'Fuck The People' is a suitably inspiring slice of social dissentary. Sadly though, the The Dirtbombs offer nothing more than a three chord, 90-second doodle. Nb. for Kills mk 2, see Gossip's 'Yesterday's News'. Further into the CD's imprint, we have the established cool of The Futureheads (with their excellent download-only 'A To B'), the Franz ('Darts of Pleasure' flipside, 'Shopping For Blood'), Fiery Furnaces and Selfish Cunt pulling up the indie standards. Stars of disc two however, are unsurprisingly Dizzee Rascal with his Blair-bothering 'Hold Ya Mouf', and the scattershot relentlessness of LFO's 'Freak'. Tremendous.

Where this compilation comes in most handy though, is when you steal all the best tracks to put on the compilations that you make to give to people. It's a never-ending cycle...