It's the new thing! The Step Forward Years 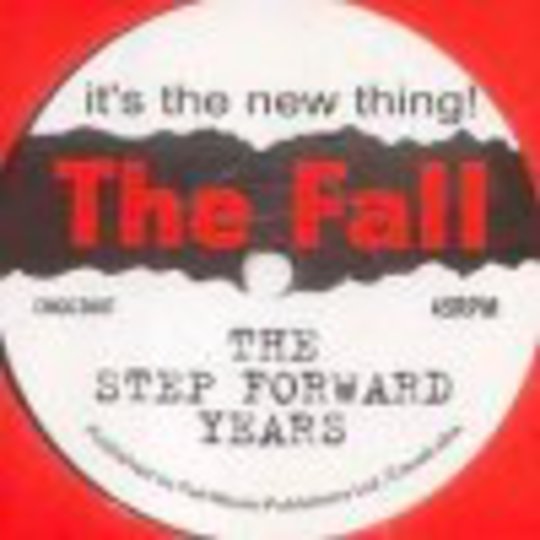 Alright then, Mark so-called Edward so-called Smith, I’ll listen to your Northern white crap that talks back: Tall ranting redolent with the scarified scarfaced semen of seminal spark, sparseness, strangeness. And yeah I do love ‘Live At The Witch Trials’ and yeah I do think it’s all to do with the crassness of your creepy creative craphead vandal vocals and the whingy whirring wierdo wired psychotic perfectionlessness of the badly recorded bardic bastards banding and bonding behind you, and you awkward fuckers, you still sound like the brokenheaded-but-unbowed, yeah even twenty years after these first immaculate roaring sputtering crap rap rhythms hit the streets.

'it’s the new thing!' is the soundtrack to a million daydreams and a million nightmares, a marvellous miasmash (sic) of momentary and arbitrarily dirty and delectable aggressive and regressive error-and-razor-edged mental soundscapes. And this collection, a re-issue of The Fall’s two albums and four singles on Mark P’s Step Forward label is also the soundtrack to Manchester and misfits and drizzle and joy and an inspiration and frustrating and irritating all at the same time.

And alright, people will no doubt say that we don’t need another Fall re-issue, for after all this is a fluid and fascinating outfit that blurt out seventeen albums every year with every single one having at least one reviewer commenting on the erstwhile E-stranged one’s spiky spine and cantankerous communication. I say yah boo! because these 20 tracks are vibrantly and tunelessly cut from the cloth marked ‘scrawny idiot’ and ‘harridan genius’ and it is true and fabulous and happy and fucked-up and inviolably written that you can’t have a world without either of these things.

Sure the tracks and the sounds have a Punk predilection and are immediately identifiable as screaming drunkenly and cut n’ pasted direct from the Seventies (the 'singer', of course, is in his seventies); songs and music and records and sentiments exist however in a space that is far from linear and in fact oft-prove that art transcends such petty constructions of scurrying deathchasing pseudery.

So play this record at gigs / in schools / in the street to children and watch them grow up buying cardigans and wandering round adding extra syllables and vowels to their essays for their English teacher. Christ knows that there aren’t many bands that can do that anymore.