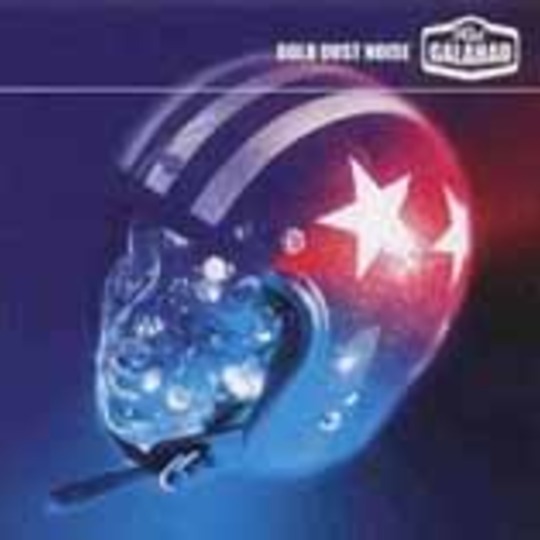 Kid Galahad; best known for their funky sing-a-long chorus’ and chilled out verses. Think Beck and you’re 90% of the way there, with the opening track ‘Where’s My Gold’ cautiously treading the line and coming worryingly close to ripping off the infamous Beck track ‘Loser’. ‘Gold Dust Noise’ sees the band, after four EPs, attempting their first full length album, and despite the irresistible chants of ‘Pack It In’, dazed plods of ‘Skedaddle’ and jumped up cheeriness of ‘Stealin’ Beats’ I have to confess, I’m not quite 100% convinced.

Whilst there are some dazzlingly absorbing possible singles (the majority of which have already featured on the EPs) there are an equal amount of positively dull, tedious tracks which can only be described as fillers. On a CD with only 10 tracks, and after a career that spans almost three years, I quite frankly expected more.

However, I wouldn’t describe ‘Gold Dust Noise’ a let down. After all, it has barely left my stereo for more than a few hours since I bought it a week ago. And as a first LP, it’s certainly a bold attempt. Perhaps I was just expecting too much… With imminent comparisons to legends such as Beck, Jane’s Addiction and even the Beach Boys to live up to, it’s not really surprising that Kid Galahad aren’t quite attaining expected levels just yet.

If this album is anything to go by, I can pretty confidently make the assumption that another 2 years will either see them run out of material and, consequently, end the band. Or, hopefully, they will continue to develop and flourish, becoming one of the UK’s most essential, captivating acts this decade. Only time will tell which route they follow…