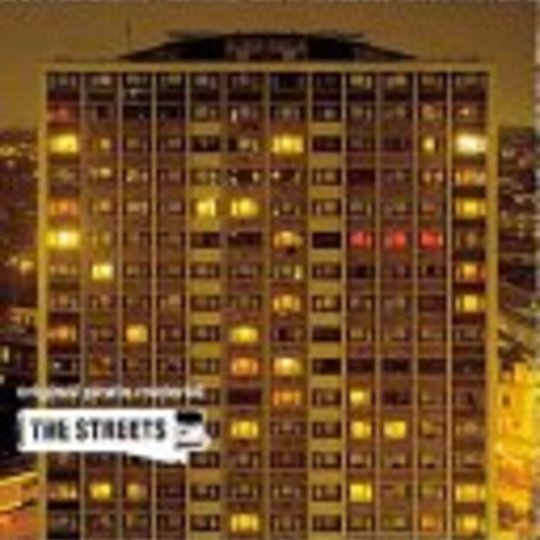 2002 is turning out to be the year of the landmark record. While Electric Soft Parade are making indie records that excite, Hundred Reasons are re-defining British Rock. And then, of course, there's The Streets.

For as landmark records go, this is up there with the best of them. Mike Skinner (For he IS The Streets) has created an album so real, so passionate, so moving, so funny, that it's gone and defined a generation. Blair's Bland Britain.

To call it a "Garage" album would be to do it the greatest of injustices. This isn't a record to inhabit just one genre, to serve one type of person, it's universal. The only Garage echo comes in debut single 'Has It Come To This?', which ironically is one of the weakest tracks here.

The production is decidedly low rent (almost Atari Like) but that only adds to it's charm. Skinner is far removed from the smooth grooves of The Artful Dodger or the West Coast Hip-Hop production of So Solid Crew ("Round 'ere we say birds, not bitches"). The fact that Skinner's verbal diatribes are accompanied by minimum technological enhancement only add to their power.

And what diatribes. From the clarion call of future single 'Let's Push Things Forward' to the classic mates v. birds situation of the lively 'Don't Mug Yourself', spoilt only by the leery swearing which is tagged on at the end, these are lyrics of the highest order.

Right from the outset, we are given violently accurate snapshots of contemporary British life. We've all been in the simmering post-pub takeaway watching 'the big spinning stick' from 'Geezers Need Excitement'. We've all had the over hedonistic alcohol fuelled nights as beautifully described in 'Too Much Brandy'. You feel a kind of acceptance listening to this album. These are your people. Your situations. Your lives.

Skinner is at his best, though on the more down-tempo tracks. The almost tear-jerking 'It's Too Late' with it's mournful strings and powerful 'she's left me' lyrics is as moving as any Nam acoustic lament. But even then Skinner can't resist a joke; "We met through a shared view. She loved me and I did too".Genius.

As is the devastatingly heart-crushing tale of Skinner's first E in 'Weak Become Heroes', or the bleak, scarily real tale of junkie lives in 'Stay Positive'. This is marvellously moving music.

And all top of all this, there's the Party Political Broadcast of 'The Irony Of It All', the hilarious tale of a pot smoking student and a violent alcohol fuelled thug. It's one of the most stirring pieces of music ever recorded. It's a song to make you want to march down to the Houses Of Parliament nude and demand the legalisation of cannabis. Don't get that when you listen to Travis.

It's difficult to establish just how good this album is. An album to re-awaken British Pop music from it's overlong slumber. Here's hoping someone, from whatever genre that wish, will rise to the challenge of this album.