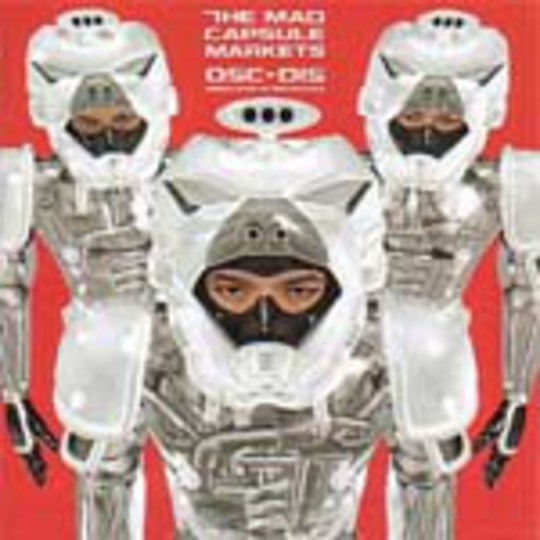 Insane. The only one word that can satisfyingly describe the Mad Capsule Markets and the wonderful racket that they make. Imagine a coalition between the Prodigy, Sepultura and the Offspring and we’re kind of getting close to defining the sound of ‘OSC-DIS’. Album curtain-raiser ‘Tribe’ starts with a nice techno keyboard sound before adding Japanese lyrics and a guitar sound that Slipknot wouldn’t blush at, before giving way to a typically distorted vocal line in English. Nuts? Well, that’s a pretty accurate description of what the Mad Capsule Markets have been doing for the best part of a decade in their native Japan, and now they’re getting ready to unleash their craziness on the rest of the world. Be prepared.

For starters, ‘OCS-DIS’ sounds like no-one else to ever walk the earth and makes the incongruous seem perfectly natural and there lies the bands appeal. ‘All the time in Sunny Beach’ begins with a Soulfly twinged riff lashing out in full thrash mode, before giving way to a chorus that sounds as good as anything Ginger Wildheart has wrote in his career and the sort of ‘Woooooah’ that Jon Bon Jovi would be accustomed to. ‘I’l(Pulse)’ is Atari Teenage Riot rubbing shoulders with Blink 182 and ‘Island’ goes from whistling a tune on a summer breeze to full on Naplam Death style war. Jesus, it’s even tiring trying to describe what each track sounds like. Just that it sounds like every musical style you’ve ever heard mashed into a concoction you would never believe feasible. You want Drum and bass? It’s here just wait in line with thrash metal, jazz, techno and pop punk and it'll be along shortly.

If you like your music hard and heavy, whether it be rock or dance, this is a record for you. If you love melody and pop-craftsmanship, you’ll fall head over heels for it too. Hell, if you like any kind of music there’s something here for you, the appeal is universal. While it sounds like the soundtrack to the worlds happiest mental institution, this is by no means a bad thing. Despite being the most weird, anti-mainstream thing you’ll ever lay your ears on, it can’t help but captivate and thrill you simultaneously. Don’t ask questions, just join commit yourself to the Mad Capsule Markets wonderful asylum. You’ll be glad you did.

Supine On The Astroturf EP