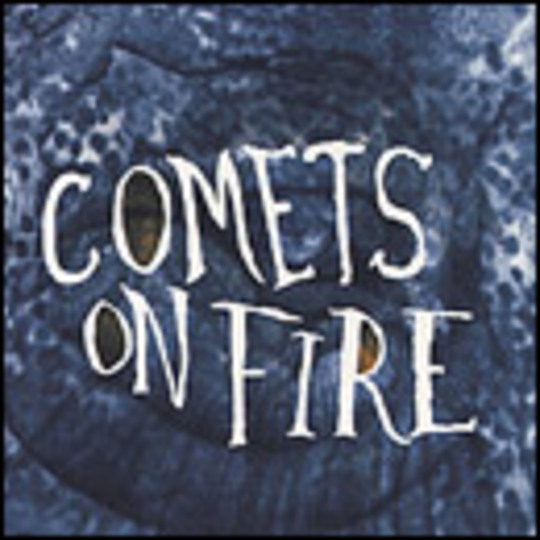 When Julian Cope gets excited about a band, it’s only right that we, the record-buying public, take notice. After all, Mr Cope is a certified loon, so ignoring him would only see him bang on about this, that or the other with increased passion and gusto. In this case, the other is Comets On Fire, a five-piece straight out of the Bay Area. And you know what? The man Cope might just be on to something.

‘Blue Cathedral’ is Comets On Fire’s third album, following a self-titled debut in 2001 and ‘Field Recordings From The Sun’ the following year. Their expansion to a quintet following the recruitment of additional guitarist Ben Chasny adds depth to the already rich tapestry of sound showcased on ‘Field Recordings…’, leading to an album that is both abundant in depth and variety, as well as in terrifying walls of noise and gaping chasms of silence. The mastering of such dynamics is a tricky process, one that many attempt but few perfect, but Comets On Fire have nailed it.

‘Blue Cathedral’ begins in spectacular fashion: ‘The Bee And The Cracking Egg’ is the kind of frazzled, psychedelic brain-toaster than you know The Icarus Line would love to have penned. Indeed, if they’d grown up in Somerset on a steady diet of King Crimson and early Genesis as well as My Bloody Valentine and Spacemen 3, then they’d probably be producing records in a similar vein. It’s a monstrous curtain raiser, and one that really doesn’t have you expecting what comes next. ‘Pussy Footin’ The Duke’ is Yes if they’d emerged from obscurity today rather than 35 years ago, the cascading keys worthy of Rick Wakeman himself. It chimes rather than booms in the style of the previous track, and is purely instrumental. First-song service is immediately resumed though, with ‘Whiskey River’ winding its way through seven minutes of sonic ecstasy, Chasny and founding guitarist/vocalist Ethan Miller creating almighty aural structures with just a few pounding and dangerously drawn-out chords.

But still Comets On Fire refuse to be pegged. If the bombastic psychedelica isn’t floating your boat, along comes ‘Brotherhood Of The Harvest’, another instrumental number. Its ambient, duelling guitars recall mid-period Pink Floyd (‘Wish You Were Here’ etc), something that may have occurred to the band too, considering the song title (think about it, kids). Closer ‘Blue Tomb’ is the high watermark of the record though, a ten-minute-plus epic that combines elements of everything you’ve heard thus far, and scatters them, creating a multicoloured, mouth-watering musical landscape. You can just picture Cope, in unadulterated pleasure, skipping about his house in his underpants to it. Bonkers? You betcha. But ‘Blue Cathedral’ is something you must hear, be you a fan of Muse, Cave In, Dead Meadow or any other slightly prog-influenced outfit, or simply of pure, sonic excess and indulgence. This is exactly that, concentrated on a single disc. And it’s fantastic. We, the record-buying public, need music like this. We demand it. It's our addiction. It sets fire to the soul, expands the mind and, most of all, rocks heavier than entire undersea mountain ranges.

Just don’t listen to this on drugs, kids; your mind may detatch itself from your body altogether.