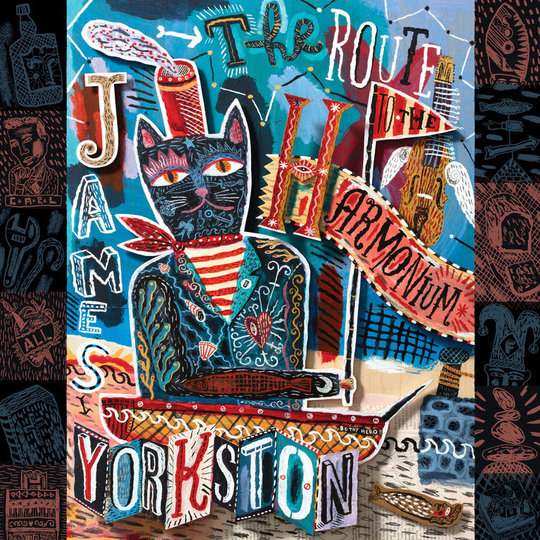 It’s been nearly 15 years since James Yorkston engaged the services of Kieran Hebden and released Just Beyond the River. His second, breakthrough and widely considered best album. It’s an interesting way to consider it, however, as you could easily argue Yorkston still hasn’t really broken through or is even particularly widely considered at all. He’s lived a life and career as steady as his music, and that’s far from criticism. Understated and unassuming, his ninth record follows suit in a lovely manner. The Route to Harmonium was recorded by Yorkston in his home studio, a ramshackle loft once used to repair fishing nets in the small Scottish fishing village of Cellardyke where he lives.

Tidied up and fleshed out before release with flourishes of percussion, trumpet and piano, the closeness of the sessions is nonetheless is felt throughout in Yorkston’s softly accented lyricism and gentle guitar. He truly presents as an authentic bard of the Celtic traditions, wandering minstrel sharing his tales with any who’ll listen - the fishing villages and loft studios serving to scaffold such perceptions. But where folk music - especially post For Emma - can be somewhat of a habitat for the pretension of self-discovery via the isolated exile of oneself, with Yorkston it really feels genuine. His music feels part of the scenery rather than derived from it. The softly picked and swept guitars spread their roots deep into his musical heritage, while the songs he sings tell tales that feel passed through the generations, even in their deeply personal nature.

For he is above all a storyteller. If nine albums of folk music won’t do it, his 2016 book 3 Craws and various collections of prose have also made him a published author and poet. The track titles reflect this - ripples of distant fables, campfire histories and cautionary tales populated with characters of Yorkston’s design. His love for poetry also shines beyond mere lyrics. “I wasn’t caught up in the wars of Irish Independence, except by the noose of a religion, hung around the neck of a gullible schoolboy” he utters on ‘The Irish Wars of Independence’, one of three powerful spoken word tracks on the record, continuing “if your god is asking you to hate, well friends, you’ve made a big mistake”. ‘My Mouth Ain’t No Bible’ is another remarkable spoken word piece. Written through the eyes of a “dear departed friend”, its insistent martial rhythm drives it forward with urgency as it deals with pain and loss. You pick up sharp and clever truths amidst the tumult like, “so, what happened? Well, my mind just cracked, but unlike our Lenny Cohen no light got in, just dark.”

Yorkston has said about the song, indeed the album as a whole, ‘when a friend jumps ship, or is otherwise taken, it’s a haymaker to the gut, you know?’. The spoken pieces stand out for their uniqueness, but his gift for melody alongside the eloquence remains. “Some people I love made bad decisions through their fears or their addictions, but like bees to a foxglove they return” he sings with restrained resignation against a melancholic trumpet line on ‘Like Bees to a Foxglove’. ‘The Villages I Have Known My Entire Life’ plays out with soft piano chords against a lovely melodic rise and fall as he insists “and I promise that I did my best, but I was not trained for this.” It’s an understated record brimming with sincerity, a rarity in an industry where the ones who shout loudest are often heard. Yorkston feels like a man who genuinely does this, not for fame or money or even to send a message, but simply as catharsis and because it means something to him. The Route to Harmonium is another chance for us to share that with him.