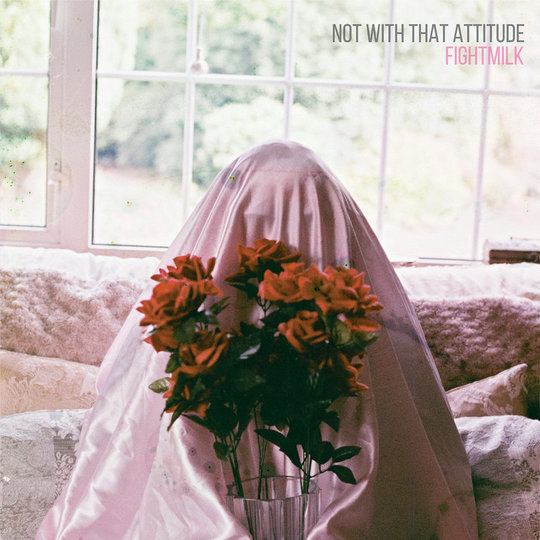 For a band named for a fictional energy drink featured in the cruelly brilliant It’s Always Sunny In Philadelphia and an album title seemingly purloined from the hilarious but overlooked Adult Swim show Frisky Dingo one might expect Fightmilk's Not with That Attitude to be an overtly comical, maybe even trivial, affair.

The album certainly does have its moments of humour but, happily, they come in a package of massive, Godzilla-heft hooks, sweet n’ sour indie pop and painfully well-observed commentary on romantic and social interaction that rings awkwardly true as often as it entertains.

Punching hard from the off with the Superchunk swagger of ‘How You Move On’ , vocalist/guitarist Lily Rae berating the idiocy of an ex-partner with overtly questionable taste in tattoos (“Lasers are painful - but I think you need it” she sagely, cynically observes) the band are firmly set in the musical mould of American indie rock - but with the kind of smart, biting lyrical sensibility that aligns them with the likes of Muncie Girls or the near-perfect Shit Present.

If you’re searching for a skyscraping chorus paired with raucous, tender vocal performance there’s no shortage here from the London based four piece — ‘Lucy’ digs its nails in immediately, a Pixies-powered piece o’ pop, while closer ‘You’re Girlfriend’ bares Rae’s soul, insecurity and anguish pouring from every note as the song just fucking soars.

When the pace shifts on the majestic ‘Dream Phone’, which repurposes the guitar line from New Order’s ‘Ceremony’ to craft a haunting, irresistible electro-pop tune, drummer Nick Kiddle shines from behind the kit with a series of strict, synchronised beats.

The Weezer chug of ‘Not Going Anywhere’ is a warm hug of a song, counteracting with its reassurances and golden tones some of the savagery of the likes of ‘Four Star Hotel’ with its particularly heartbreaking “How can I convince you that we’re stuck? A four star hotel and we still didn’t fuck.” Yet whether the approach is welcoming or downright despondent, the surging static of Alex Wisgard’s deftly wrangled guitar lines and Rae’s knack for crack-like melodies are a constant.

A standout moment among many is the stunningly instant, deliciously devoted ‘Over’ - “I’m gonna fall for you over and over” intones Rae in the song’s tear-pricking chorus - the heart melts, as it does once more on the following ‘Solving Crimes In Sweden’ in which we ride Adam Wainwright’s basslines into swooning glory.

This is a debut album to compare with other recent premieres by the likes of Fresh or maybe Diet Cig, though at times it feels so fully-formed and self-realised it’s like they’ve skipped the pissing about involved in finding a sound during the early days of a band and skipped to just being fucking brilliant right away.

While existence might be awkward, painful or bittersweet in the world of Fightmilk, there’s something so life-affirming and empowering about them that, even during these grey days, the sun shines through.