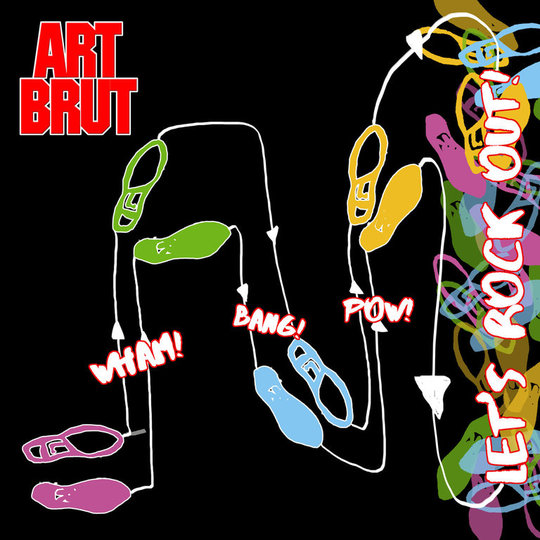 Art Brut’s Bang Bang Rock & Roll (2005) is lightning in a bottle. Mingling with the mid-Noughties British indie rock scene while simultaneously mining it for punchlines, it was fidgety, feverishly energetic, and chock full of astute observations on everything from erectile dysfunction to Turkish currency. It was nostalgic, charming, and self-effacing, too. In short, it was an absolute joy. The immediate conundrum, however, was how Art Brut could develop. Their debut’s winning formula contained such rare combinations that they were caught in a bind: repeating their initial schtick could potentially risk diminishing returns, while trying to update their sound could see them bereft of their appeal. Over the course of three further releases, the bind defeated them, and the band’s lingering struggle to form a concrete identity culminated in the unfocused and laborious post-punk of Brilliant! Tragic! (2011). It was time to rip it up and start again. With Wham! Bang! Pow! Let’s Rock Out!, that’s exactly what Art Brut have done.
<

Intended as a swansong for the Berlin-based quintet, Wham Bang Pow has actually developed into a pleasant reboot. It’s clear from the opening strands of the title track, released back in August, that we’re pupils attending Art Brut 101. It fires out of the blocks via skeletal basslines and direct, forceful drum patterns, laying down the foundations for Eddie Argos to pipe in with tales of house parties gone wrong: “We'll make some enemies in the kitchen / Because we don't care whose booze we're drinking.” The song is then blown apart by a concise, direct chorus that races to the point via call and response, with Argos loudly referencing the “fire in [his] soul” that he can’t put out. It persists with the jet-engine streamlined force of a Nineties power pop number before wrapping up in under three minutes. It’s a familiar box of tricks, but Art Brut sound as though they have renewed focus and energy.

Similar could be said of ‘Hospital!’, which glances at Argos’ battle with diverticulitis. The pace is more considered, but the song’s momentum is driven by the anticipation of Argos’ next wisecrack. It’s not his most hilarious sketch, but that impatience for him to jump to the next punchline was what made Bang Bang Rock & Roll such an exciting listen, and he’s in his element here. Recounting autobiographical incidents in the manner of a peppy stand-up comic is his forte, and it shows: “They tried to make me go to rehab / And I said, ‘That’s probably a very good idea”. The same could be said of ‘I Hope You’re Very Happy Together’, which sees Argos using comedy to treat his heartbreak while sparsely employed brass sections provide neat augmentation. ‘She Kissed Me’ also utilises celebratory horn sections to signify the honeymoon period of a relationship, and opts for a driven power pop chorus too, with Argos’ words providing sincere commentary on budding love: “I don’t care about your friends eye-rolling / our over-the-table hand holding.” After so long in the game – and after so long out of it, for that matter – it’s reassuring to feel such pure emotion in Argos’ penmanship and in his band’s efforts to support his words.

With that in mind, though, brief brass sections and the odd power pop chorus can’t always distract from Wham! Bang! Pow! feeling like a deliberate exercise in familiarity. This is Art Brut 101, after all. ‘Awkward Breakfast’ recalls the NME-compilation playlists that accompanied transitional shots in The Inbetweeners; ‘Schwarzfahrer’ has something resembling a chorus, but I’m not sure if repeating the song’s title four times actually qualifies as one; ‘Veronica Falls’ nominates itself as a contemplative pause but winds up as slightly exhausted Britpop; Argos takes a walk around the German capital on ‘Good Morning Berlin’, but even at 39 he’s still mostly concerned with the drunken disgrace and sexual frustration of the post-adolescent experience.

And yet, none of the above feels fatal simply because Art Brut still know how to conjure the affectionate aesthetics of an otherwise forgotten time. It’s somewhat comforting to be reminded of a time when E4 Music delivered your indie rock fix, and when Jo Whiley saturated Radio 1 with The Fratellis. Wham! Bang! Pow! has to work harder than most to create effective nostalgia while avoiding every possible rehash pitfall, but it mostly achieves its mission. Argos is still grappling with Peter Pan syndrome, yes, but the bursting childlike spirit at the very core of this band has mostly been rediscovered here. After five albums, and after seven years of silence, it’s obvious now that Art Brut work best when they’re back to basics, reminding us what it might have been like to be fresh out of university in pre-recession times, and ensuring that we can dance along with them while they’re at it.