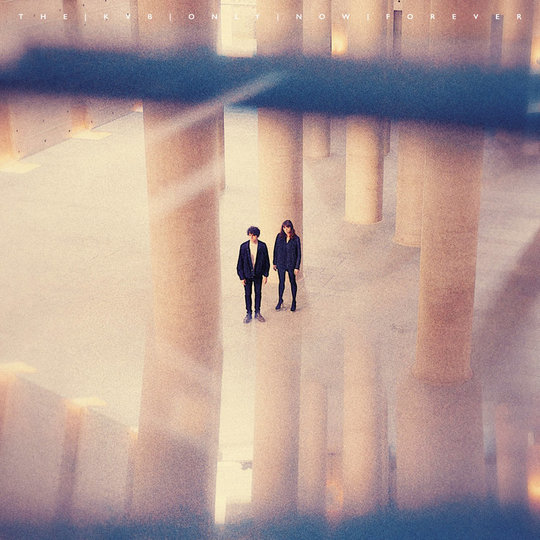 At the impeccably-curated La Route du Rock festival in France at the tail-end of the summer, The KVB headlined the opening party – held in the Nouvelle Vague club rather than the outdoor ruins of the nineteenth century fort in the Brittany countryside.

It was an astute basement booking, and the English duo’s motorik psych-rock and synth grooves almost felt like a palate cleanser after Ezra Furman’s alt-rock histrionics and the art-pop dramatics of Marlon Williams – with the pair in blue light silhouette amid sleek analogue synth lines and shoegaze guitar drones.

The duo’s sixth album is another evolutionary creep rather than any attempt to clear the decks. Then again, Only Now Forever is quite a few degrees of separation from the KVB’s early days as Nicholas Woods’ solo bedroom project, before he was joined by partner Kat Day on synths, visuals and vocal textures. There are still echoes of detached post-punk melancholy as they channel the Jesus and Mary Chain, transition-period New Order and The Horrors, but more light seeps through here, with Woods’ vocal melodies inching out of the shadows.

Only Now Forever follows 2016’s Of Desire, which they recorded in the studio of their Invada label boss Geoff Barrow of Portishead and Beak>. In the past they’ve described Barrow’s analogue treasure trove with wide-eyed wonderment, and as a catalyst for more experimental arrangements. They used the sessions to level up and self-produce their latest album in their home studio in Berlin.

Lead single and album opener ‘Above Us’ could well take over as their new calling card, throbbing along some autobahn, evoking ‘Isi’ by Neu!. It perfectly suited their abstract road movie visuals at Nouvelle Vague, like David Lynch’s Lost Highway through a post-punk brutalist prism. The title track is another gleaming widescreen motorik passage, with its analogue swirls and a twinkling guitar motif you’re already humming after two bars. ‘On My Skin’ is their sweetest song to date, with Woods’ gentle vocal melodies evoking the polite restraint of Kraftwerk’s Ralf Hutter or classic aloof synthpop singers like Neil Tennant, with a Brotherhood-era New Order guitar sheen.

Fans won’t be ditching their black clothes yet, though — this isn’t exactly the KVB’s ‘pop’ album. The second act initially feels like they’ve slipped a gear, but after a few spins the tempo drop lets the intricate sound design unfurl, with metallic robotic handclaps, spun-out synth flanges and Day’s wispy vocal harmonies to hang on to. Day takes over mega-reverbed whispered lead vocals on ‘Into Life’, a dubby space disco slow jam, while the snarky synth riff on Afterglow sounds like a hardcore rave record at 33 instead of 45, with the type of back alley fog atmospherics perfected by Colder on his overlooked cult album Again. ‘No Shelter’ feels like it could be a pitch to Lynch for a druggy bar scene if he ever does a Twin Peaks season 4, and he fancies a change from Chromatics.

It doesn’t end in a hungover haze, though. Album closer ‘Cerulean’ may sound like the title of a mid-Seventies Tangerine Dream album, and its gleaming synth melody could easily pass for one from Edgar Froese’s vaults, a laser beamed Jean-Michel Jarre encore or even a cult sci-fi theme. If their live visuals previously nodded to industrial monochrome road movies, the KVB are just about taking off right now.