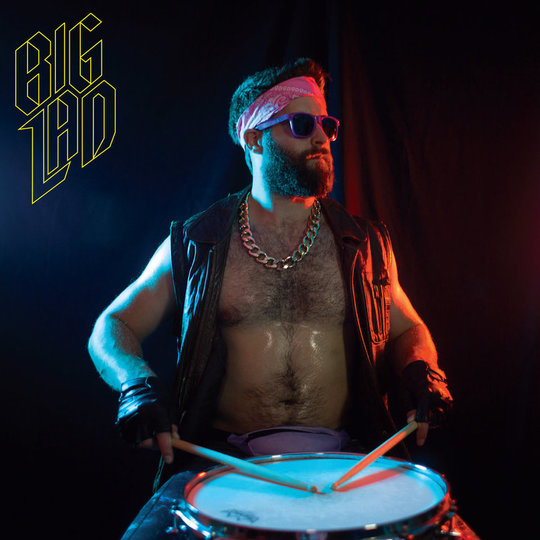 “Are you ready! Let's play!” Thus begins synth/drum duo Big Lad’s Pro Rock, in the voice of a decades-old video game character, and it’s wise to buckle up. The level of G-force apparent on the band’s second record requires a strong constitution and a certain indifference to your own well being (or that of your eardrums at least). It’s also a telling introduction to a record that is grubbier and funnier than any Venetian Snares influence may suggest, and ultimately more listenable than the Lightning Bolt comparisons the duo are often charged with.

They’ve certainly made a shift from the bludgeoning collection that was Big Lad (made under their previous epithet Shitwife). Having changed their name to that of their debut record, Henri Grimes and Wayne Adams follow it up with a record that’s no less brutal, but one that includes a fuller range of textures and tunes that you can actually extrapolate from the feverish racket.

Pro Rock is the sound of a hyperactive child fuelled by an overdose of Haribo let loose on a dusty hoard of synthesisers and a drum kit. 8-bit synths and breakneck drumming make mincemeat of air particles and leave scrambled brain cells in their wake. Before you even press play the cover greets you with an unlikely, yet transfixing, visage: sweaty leather clad drummer Grimes, bare-chested and sporting a bandana, recalling underground gay club culture circa the Eighties (a strong contender for Album Artwork Of The Year I’d proffer). Then take the track titles, ‘Macho Randy Savage’? ‘Ted Banger’? ‘Donald Tramp’? These lads clearly have a sense of humour, the absurdity of which reveals itself in due course.

The record violently absorbs a multitude of styles and genres, with ‘Dave Aoki’ replicating thrash metal riffs via synths before implementing breakcore interludes. ‘Banana Split’ at times brings to mind Anna Meredith’s pre-Varmint chiptune forays into electronic compositions but with double the BPM and a rabid thirst for discordant noise. By the time ‘Michael J. Decaprio’ lands things are starting to get more sinister with glitches that muster Aphex Twin’s own warped explorations, and ‘Party Salad’ evokes a very John Carpenter-like variety of cold horror. In between ‘Ted Banger’ and ‘Donald Tramp’ clobber the senses in such a way that leaves little doubt that THIS IS HARDCORE, whatever its derivation.

The danger is that you could spend Pro Rock’s runtime foraging for countless obscure touchstones and niche references, but you’d be missing out on how much fun these fellas are having. It’s an endlessly entertaining curio that, despite a myriad of familiarities, summons its own unique world. If talent borrows and genius steals, Big Lad incinerate their influences and make blazing music from the ashes.

Pro Rock is trippy, weird, manic, deranged, and endlessly entertaining. Strange times call for strange music. Happily, Big Lad is on hand to freak you the fuck out in the best possible way, or to quote the chief Gonzo misfit-enabler in the sky, “When the going gets weird, the weird turn pro.”