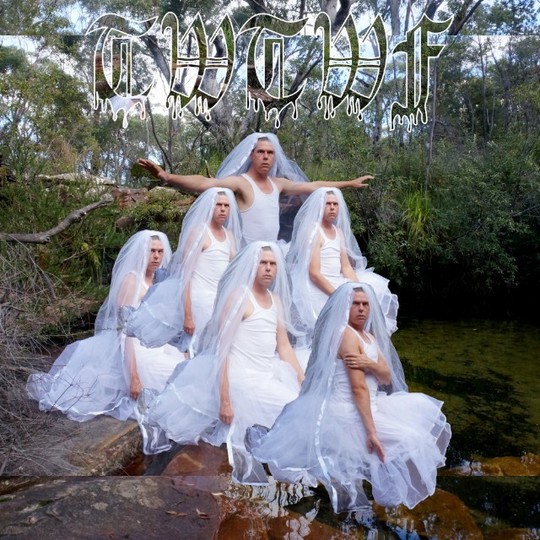 Last year, Liars - now the solo project of Angus Andrew - had something of a renaissance inspired by a difficult situation as much great art often is. TFCF was something of a mini-revelation musically for the Liars project, which had grown slightly languid in recent years, but it was also a necessary exorcism of daemons for Andrew, as he recorded an emotional goodbye to his former creative partner of 15 years Aaron Hemphill, after he amicably split from the project prior to the album's release. ‘Emotional’ is a word that had likely never been attributed to Liars before, however, TFCF was a stirring collection of songs in which Angus likened his estranged relationship to Hemphill as being like a divorce, using much marital imagery both literally in the artwork and lyrically.

So a year on, and Andrew has returned with the follow-up, a companion piece or ‘sequel’ as he has coined it, Titles With The Word Fountain which was recorded in the same sessions as TFCF which is short for Theme For Crying Fountain. In those sessions, Angus escaped the busy metropolitan sound of Liars' previous records, of Brooklyn, Berlin and Los Angeles, and retreated to a home-built studio in the bush of his native Australia, a couple hours north of Sydney. He gathered field recordings of his new, natural surroundings and built songs around this process, adding beats or experimental instruments to create a distinct mood that any experimental artist would be proud of. These 11 songs were tightly packed, inventive and never outstayed their welcome, with a palpable feeling of catharsis running through the record's veins.

In comparison, Titles is a much more free-form and experimental consideration of the sound Andrew struck upon when creating TFCF. It is immediately apparent these tracks come from the same sessions, they instantly place one back into the same universe as last year's record, but this is more abstract. Seventeen tracks that often feel like sketches rather than fully-fledged tracks, Titles is a much more ambient piece which while still interesting to explore due to the record's nature to always keep one on their toes, its lack of focus compared to its predecessor does ultimately make it a less engaging listen.

Single 'Murdrum', as well as 'Face in Ski Mask Bodies To The Wind' do feel like more concrete pieces, as does finale 'A Kind of Stopwatch' all expanding on the world initiated on TFCF. Due to the fascinating concept Andrew used to create these sessions, Titles still has plenty of worthy stuff to make this expansion worth exploring. It's just hard to really judge what this album is, and especially given it also serves as a re-issue of the far superior TFCF. There is a remix of that album's stand-out single 'No Help Pamphlet' - a song which is quite possibly Andrew at his most exposed ever - which seemingly intentionally takes away the original's emotional impact, which is disappointing, as there was a lot of power in that.