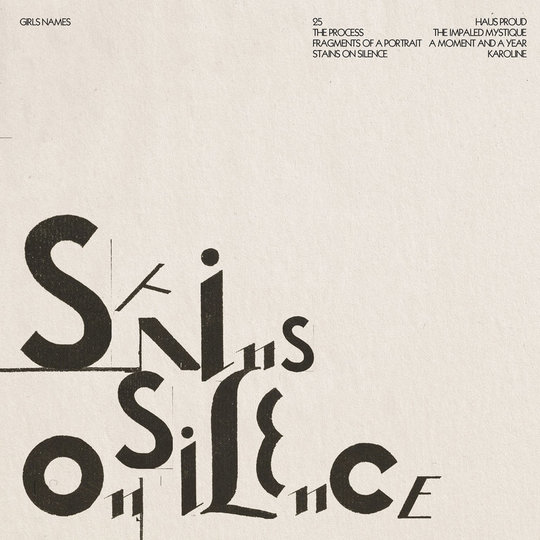 As with most other bands that undergo a personnel change, Northern Irish outfit Girls Names have had something of a sonic realignment, as a new balance is reached and existing ideas are tweaked and put through a new frame of reference.

After 2015's second album Arms Around a Vision laid out a post-punk vista that held equal warmth to its haze, the band was almost rent asunder by the departure of drummer Gib Cassidy. A mix of the follow-up was untouched for six months, before eventually being added to and reconstituted at studiosand locations around the band's native Belfast.


That process, as well as a resolute vision to cast the album as a comedown companion to its critically-acclaimed predecessor, has shaped Stains on Silence into a compelling, intriguing listen, invested with the frustration of impatience and consideration for the band’s place in the grand scheme of things.

Languid opener '25' takes its time to get going but sets the tone for the entire record in short order, and 'The Process' continues a cantankerous mood, a nonplussed bassline underpinning wailing, near-gothic guitars. The band’s eye for cinemascope is never far, though, the controlled shimmer of guitars a peppering ‘The Impaled Mystique’’s mid-paced canter, not far out of place in a period sixties or seventies drama, stopping for a breath with some seriously cocky, high-tone bass. The warmth is there, too, settling nebulously over ‘Fragments of a Portrait’ as drum programming weaves discreetly in and out of the mix.

Not that it's all downers, though: 'Haus Proud' goes equal parts doom and dreampop, pedalling along a washed-out disco beat. But it's in the second half of side B that things pick up - the title track distills the elements present throughout the record and drags them across six minutes to compelling effect, while 'Karoline' crystallises the band's newly-emphasised focus along the lines of dour repetition and layering. Reassembling a record and dealing with an entirely separate process on the organisational end of things can surely be no easy task.

It’s reflected in Stains on Silence as a whole, stark in tone and sound, but invested with the humanity granted to it by the hard work that kept it and the band alive. This one takes a few listens, but in aiming for less, Girls Names have easily achieved as much as they have in previous albums, if not more. Time should be kind to the invention on display underneath all the layers.