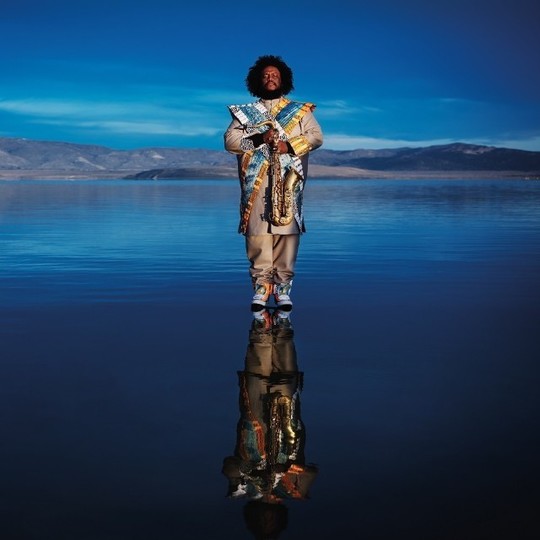 Ever since 2015’s landmark album The Epic, Kamasi Washington has been something of an icon in returning jazz to a wider platform. Despite being a deeply layered, triple-disc album, The Epic won countless awards and high albums of the year placings not just from the traditional jazz press but also plenty of indie-rock publications too. Then last year’s Harmony of Difference EP (despite being for most an album’s length) consolidated Washington’s status as being the real deal, with a beautiful closing track ‘Truth’ which spoke of the beauty in people’s differences living in harmony.

Somehow, on top of all this, the mercurial Mr Washington has found the time to compose a new double-album of original music, his follow up full length Heaven & Earth. Once over the initial confusion that Heaven is side two and Earth is side one, this yet another incredible, mind-opening exploration into Washington’s ideas of creation in the universe. In his words:

While these lofty ideas may seem a little abstract to the casual listener, there is a clear marked difference between the two sides, with the Heaven side in particular the more 'spiritual' sounding of the two, dipping its toes into gospel to show this, especially on ‘Journey’ with its central vocal-line touching upon the hymn ‘Joy to the World’.

Earth opener ‘Fists of Fury’ is a fantastic entry-point on this epic journey. It is easily the most immediate track on this record to hook the listener into the next two and a half hours (should you have the time to sit through it all in one sitting) with a brilliantly funky groove and a melody line that will become instantly lodged into the synapses. Meanwhile, Heaven opener ‘The Space Traveller’s Lullaby’ instantly creates the spacey, spiritualised side of the record to a head, with a beautiful vocal-choir performance rising and falling with the music. ‘Street Fighter Mas’ features an irresistible funky beat, helped no less by Washington’s long-time collaborator and the other current hot jazz pioneer (though coming at it from a completely different angle) Thundercat.

Heaven & Earth is ultimately yet another example of Washington’s incredible prowess behind the saxophone but also as a composer. Hopefully Washington’s music is a launch pad for a jazz revival in which the whole genre enjoys success, as it is worth remembering there is an incredible slew of talent out there to discover. This writer included, after recently witnessing this sheer power of Washington and his band The Next Step, there’s a whole world I am excited to discover. But for now, Heaven & Earth is a pretty damn great place to start.