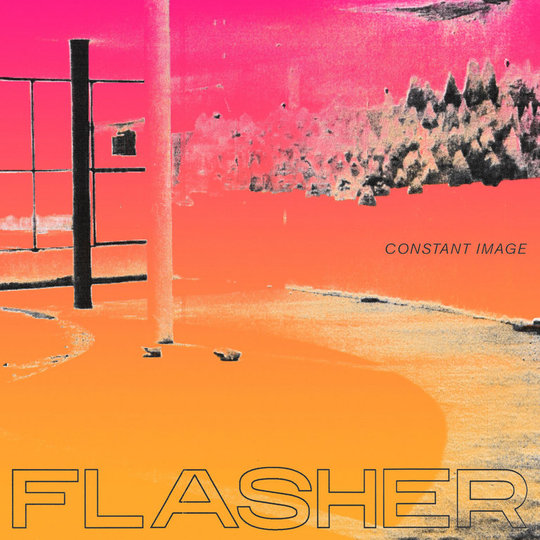 Hey, everyone. HEY. I want to wave, jump and shout. I’m trying to shake myself as much I’m trying to shake you; times are black, and I’ve had to numb myself this past week to avoid another panic attack. I’m trying to explain why Flasher have made one of the greatest debut albums of 2018 – that’s not a hedged bet, but a provable fact. They are more than three musicians-for-life from DC; they are more than new wave saboteurs who write zig-zaggedy, kaleidoscopic, thunderbolt songs that you can sing and dance to. They are even more than a post-structural philosophy that breaks down pre-conceived binaries and identities. You know why? 'Cos, above all, Constant Image is a device that sustains your existence - and you can plug in, find yourself, and re-create the world you want to see.

OK? OK. Follow me here; let me know if you fall behind. This album’s a swift one, after all, almost as fast as the flickering thoughts in a terror-stricken mind. Anxiety, paranoia, inner doubts, external pressure – that’s all here, with Daniel Saperstein’s razor-edge basslines, Taylor Mulitz’s frantic guitar swashes, and Emma Baker’s pinpoint-precise drumming. Of course, if you’ve followed the trio from their claustrophobic first EP - and even further back, to Mulitz’s last gang, the mighty Priests – then you’d expect a base level of urgency anyway. But with the extra ears of Nicolas Verhnes at Rare Book Room, Constant Image edges out of the post-punk caverns and into…

Well, this is where our analysis gets tricky. I mean, I can name plenty of signifiers here – The Breeders (Saperstein modeled their marvelously androgynous voice from Kim Deal’s), Wire, even shades of Devo. Yet, if we’re to believe Flasher (and I do), then any destination I name would be false, or 'readymade' to quote Saperstein. As ‘Material’ suggests with Cars-like radio waves and crazy catchy choruses, identity should be rooted in the immediate physical present, a “liminal” and multitudinous potential rather than pre-conceived constructs. ‘Skim Milk’ even rejects (with not a perfunctory shove, but the firebrand stamp of Saperstein’s always delicious sneer) the theoretical future, stressing with seemingly random objects the infinity possible in the here and now.

I say 'seemingly' – but for Flasher, all variation lends to resilience. The fragmented lyrics – derived through communion between the trio - point often to revelations or validations in the mundane, like in the A Goofy Movie-inspired ‘XYZ’: “Cold call from Myanmar / maybe I’ll make a friend”. Likewise, you could inject any mood-altering consumption (not just drugs) into the psychedelic take-off of ‘Go’ (substance are you coming with? / faster til you feel right), or conceive any crawling dread in the effervescent chiaroscuro of ‘Harsh Light’. The ambiguity is key – particularly with the latter, a twilight zone of internal dread and external pressure that yours truly has bobbed in all too often. Every corner that you turn, you’ll never learn / pattern missing in the grass, hard to discern” - that’s another outlet to plug into, to recharge your nerves and plan for the next assault.

But what am I going on about? For all the remarkably fluid dialogue in Constant Image, none of that would matter if the songs didn’t connect in the first place. And reader, boy do they! Songs like 'Punching Up' and 'Pressure' sound like lost gems that popped up on your local college radio station, the kind of songs that make you wait in your parked car another five minutes for the DJ’s recap. I said ‘Material’ was catchy – I don’t think I can stress enough my obsession with singing this verse: “Touch the physical / clutch the typical crush / fuck the visible livable touching everyone” (and I am typing this from memory, FYI). And in “Business Unusual” – the only explicit protest on the record, that exposes the mundane individual underneath the politicized cop persona – the audaciously louche sax solos made me laugh out loud. Yes, these songs are tools for uprooting the self from pre-determined concepts – but these are also grooves, hooks, rhythm, infectious cadence.

In short – shake me, shake yourself. If you’re looking for the next great underground resistance, OR if you’re looking for a way out of your oppressively hermetic head, OR if you just need something tangible to believe in, OR all of the above, because you contain multitudes - then hai! Meet your new favourite band.