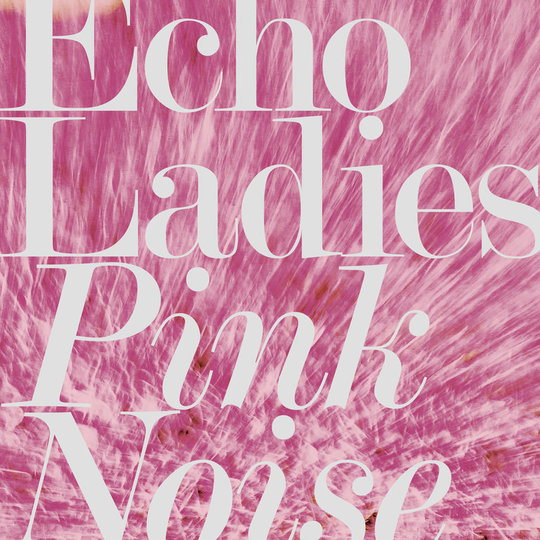 Coming of age can feel like the world is ending. The melancholy of what you know sliding into a past which you can only long for, but never return to, clashing against the euphoria of fresh starts and new vistas. That moment of passing into adulthood is destruction and creation of identity; it is hope, fear, anger and vulnerability. And it’s engrained thematically in the debut album from Swedish trio Echo Ladies, as across eight short tracks they succumb to letting go and facing fears of the unknown. Even the title, Pink Noise - taken from the setting on analogue synths which sounds fittingly 'like the world is ending' - hints to standing on a precipice of passing and potential.

Opening with the simply titled instrumental ‘Intro’, there is the race of beats and depth-charge synths as the track builds into an onslaught evocative of A Place To Bury Strangers or Sleigh Bells. While those programmed rhythms and the quickening beats weave through the rest of the album the synths soften, melting into vocals that soar in and out of the haze, making this first taste the exception rather than the example the rest of the record follows.

Far from jarring the rising panic of the first track dissipates into more reflective tones, keeping to the themes of uncertainty and promise as influences from Cocteau Twins to The Jesus and Mary Chain seep through the sound. The Eighties-infused skewed synth pop of ‘Almost Happy’ hangs somewhere between isolated sadness and flawed romanticism, the racing beat of ‘Intro’ reprised in the drawn out staccato end. While first single ‘Bedroom’ is a gentle rain of percussion and a more assured vocal - a sense the band have found their place of solace in this song, are fortified by it.

The second half of the album lets in more melancholy. The tempo slows, the beats become softer, the vocals more ethereal. ‘Overrated’ has plenty of Disintegration-era The Cure to it, languor in the lyrics and the sweeping build of sound. Album closer ‘Waiting for a Sign’ brings a peaceful acceptance in - there is a clarity to the vocals, a sharper hit to the beat but with the uncertainty evoked by changing time signatures. It’s a slower burn but no less intense than the album’s more immediate and uptempo tracks, and a fitting place to leave off, the balance between falling and flying.

With a total run time of under 30 minutes this is a short set which may leave you wanting more but it also strengthens the focus and coherency of the collection; the pacing, and the flow of feeling as much as sound, bringing this band on promisingly from their earlier EPs.

The band themselves say Pink Noise is 'the feeling of nostalgia and hope for the future, but mixed with the worries and concerns about who you are and what you will become', but those worries seem unfounded. This is a debut from a band with a clear idea of their sound, their process, and the feelings they want to trap in song. Perhaps a little soft in places it is nevertheless beautiful and gently bruised, a welcome rush of emotion blowing across the borders of adulthood rather than a visceral shove between one state and the next. A solid album from a band beginning to bloom.