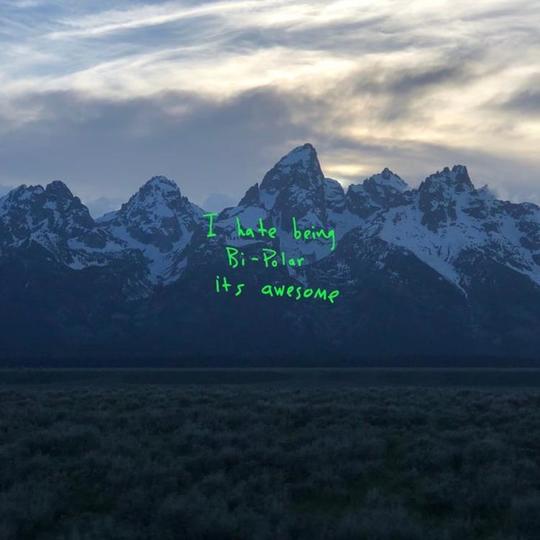 I want to talk about ye without making it about Kanye.

But in an age where separating the art from the artist feels less like a tool for objectivity and more of a political choice, that’s increasingly a no-can-do.

And – a bit like the album title itself – with Kanye, you’d only be getting half the picture anyway.

So what to say about ye?

He’s a critically acclaimed behemoth and self-proclaimed genius, whose first music in over a year featured the lyrics: “Poopy-diddy, whoop-scoop / Poop, poop”.

He’s a hip-hop artist who vehemently condemned the genre’s homophobia back in 2005, donated money to Hillary Clinton in 2015, and now professes to be pro-Trump.

He’s a ‘free-thinker’ who most of the time doesn’t seem to be thinking at all.

‘The most beautiful thoughts are always besides the darkest.”

Contradiction is nothing new of course - the cycle of creativity and controversy has carried him throughout his entire career.

But as the merry-go-round oscillates at increasingly nauseating pace, the seams aren’t just showing, but fraying wildly in every direction, loose threads catching friend and foe alike in the crossfire.

And at seven tracks clocking in at a snappy 23 minutes, ye is a super-concentrated dose of it.

There’s the expected sugar-rush of his signature soul samples (‘Ghost Town’ and ‘No Mistakes’) and the surprising sweetness of Kanye at his most reflective (‘Violent Crimes’).

There’s the salty-sweat of the beats on ‘Yikes’ with the strange, moreish bitterness of ‘I Thought About Killing You’.

In short, as with nearly all of Kayne’s output since 2010, ye smells a little funky, looks a little suspect, and yet somehow you can’t resist going back for more.

It’s testament to Kanye’s intrinsic talent: his obsessive eye for detail in his production and ear for a hook in his songwriting, brought back into the foreground by both ye and his work on Pusha T’s Daytona.

What can’t help but give you pause though, is how intrinsically linked that platform for creativity is with his mental health.

“Shit can get menacin’, frightenin’, find help / Sometimes I scare myself”

Having been diagnosed as bipolar last year, ye is heavily focused – both musically and lyrically - on bringing the lived experience of that condition to life.

Over the course of its three verses, Kanye breaks down the saga of his opioid addiction, mental health struggles and his current philosophy towards both.

Kanye’s flow is at its distinctive best here and his storytelling at its most compelling, from a chorus that’s full of startling clarity and vulnerability, to the culminating vision of Prince and Michael Jackson haunting him, warning him against their fate.

Alongside the lyrical deep dive though, the song’s structure itself also brings those struggles to life.

Kanye gets to sing the chorus twice uninterrupted. By the third pass though, TMZ-ranting, Trump hat-wearing, “Imma let you finish” Kanye crashes into view, first shouting himself out for his sexual magnetism and proclaiming his bipolar as “my superpower […] ain’t no disability.”

It’s a moment that neatly encapsulates 2018 Kanye. It’s not subtle by any means, but it is highly effective, bringing the unflinchingly self-conscious philosopher and the maddeningly unconscientious troll together in one portrait.

Here it all is: the light and shade, the inspired and inane, the flaws and the flair.

The question is whether you’re inclined to look at it or not. And with ye it’s one you’ll be able to make your mind up on with your reaction to the opener ‘I Thought About Killing You’.

The titular ‘you’ is deliberately provocative, tailor-made for a game of tabloid Cluedo (his wife Kim? His “big brother” Jay-Z?! The man he previously blamed for his mother’s death Dr. Jan Adams?!!!!), a mystery heightened by the three minutes of spaced-out, harmonic loops that lay the stage for Kanye’s opening monologue.

As the picture pieces together though, it becomes clear that the “premeditated murder” Kanye has in mind is of himself, and with that, a thumping, crisp beat finally drops and the album proper begins.

From there, Kanye sets out his stall for the record – a breakdown of his varied attempts to “clear the cache” of his “too many bad traits”.

Killing his bipolar condition with medication on ‘Yikes’.

Killing rap beefs on ‘No Mistakes’.

Killing the past infidelities he details on ‘All Mine’, with a commitment to “see women as something to nurture / Not something to conquer” by closing track ‘Violent Crimes’.

Essentially, attempting to kill whatever idea of Kanye you hold in mind – from pined-for college dropout, to the wilfully naïve far-right enabler – with a more nuanced portrayal.

"I got dirt on my name, I got white on my beard I had debt on my books, it’s been a shaky-ass year.”

As reporter Van Lathan put it to him after one of his ugliest recent missteps – the TMZ interview in whch Kanye managed to infer that slavery and holocaust were perpetuated by the victims themselves – “Bro, you’ve got to be responsible. Your voice is too big.”

To his credit, at times on ye it feels like Kanye’s taken that message on board.

On the other hand though, just as with Kanye’s attempts at an apolitical, free-thinking middle-ground on Twitter, the personas he tries on and the games he plays on this record can become less challenging, and more problematic.

We shouldn’t have to rely on our pop stars to be role models. But there’s a little too much crossover between the misogynistic cheats of ‘All Mine’ and the protective fathers of daughters on ‘Violent Crimes’ to sit comfortably.

If the problem is that Kanye often gives himself too much rope to hang himself with though, then ‘Ghost Town’ provides the solution.

ye’s most consistently potent moment, it’s a relay race of killer features and production choices that stitches some of the best bits from Kanye’s entire discography together.

A wistful Shirley Ann Lee sample passes the baton to PARTYNEXTDOOR, whose raw, wavy delivery takes us to church, threatening to run away with the track before the minute-mark’s even up.

Kid Cudi then takes the mic, crooning in an almost painfully flat tone that serves its lyric perfectly “I’ve been trying to make you love me / But everything I try just takes you further from me”. Essentially, ten years of Kanye’s life summed up in one raw couplet.

Eventually, Kanye himself turns up, sing-rapping his verse over gospel organs, his lyrics life-coaching himself away from the drugs and the drama and turning his hopes to a brighter future.

And then finally, recent G.O.O.D. signee 070 Shake takes us home over power-chords, crashing drums and lasers, layers of vocals building a lyric as dark as “I put my hand on a stove, to see if I still bleed” into a stadium-sized, unifying chant about the power of letting go.

In short, it’s epic. And, if he’s serious about being a unifying platform, using his “superpower” to bring together experiences and views from all sides, maybe this is Kanye’s future – both the curator and the catalytic element.

Kanye Omari West’s art is made for our times.

From the transparent case of of Yeezus, through the work-in-progress nature of The Life of Pablo, to 24 minutes of content fuelled by 24-hour news cycles, these records capture Kanye’s interpretation of the zeitgeist and exist to mess with our expectations of what an album should even do.

It’s not been good for his health.

It’s not been good for ours.

But – one way or another – it gets the people going.