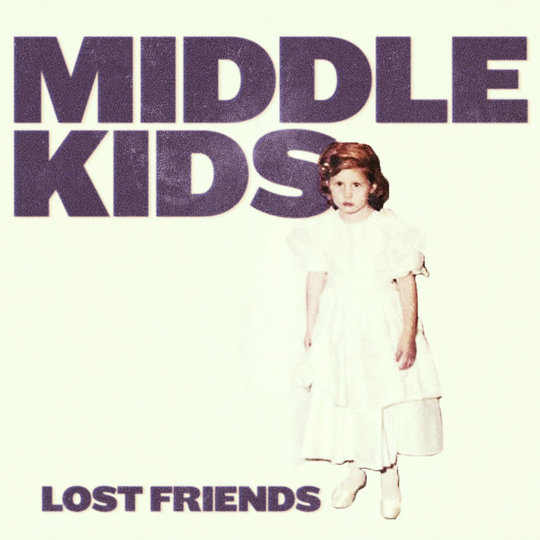 I heard Middle Kids in the coffee shop the other day. The house music was locked onto some Sirius indie rock station – Big Thief and the New Pornographers also drifted on in the same hour – and I barely realised what was happening. For a second, the big single ('Mistake') didn’t even register as new; that particular formula of sweeping vocals, carefully tarnished guitars, and functionally plodding drums hit me like a nestled memory, some slice of college radio I’d long forgotten.

Actually, that slice floated back to me a week earlier at work, within some cribbed playlist of pop also-rans that someone from HBO threw on. Echosmith’s 'Cool Kids' was another disposable Big Single four years ago – you had the jangly guitars, a shallow boppin’ beat, that frosting dollop riff. But Sydney Sierota’s wistful delivery cinched all those millions of hits (92 mil and counting on YouTube); as with all pop icons, she tapped a universal truth – the outsider adolescent’s irrational yearning to 'fit in' – and amplified that into an easily digestible sing-a-long. This, of course, imposed the sort of high school musical-esque proselytising that erases all nuance from the perceived other, as if everyone could just shrug off their peers’ ostracising with a winning smile. Hardly the sort of blind optimism that a 'real' indie group would adopt, eh?

Well. Middle Kids don’t pretend to be saviors, but they can’t claim any authentic back story, either. The Really Big Single, 'Edge of Town', blew up two years ago on Triple J (and Elton John’s Apple Music show!) before the Sydney-based three-piece ever played a single gig – a true pop ascension if ever there was one. To be fair, the self-titled EP that billowed out from 'Edge of Town' nine months later was OK; but here we are at the full-length Lost Friends, and Middle Kids have arrived late to the international party. Given the other gifts we’ve been graced with in the past two years – with nuanced dialogues and tightly knit hooks from the likes of Big Thief, Lucy Dacus, and Jesca Hoop – our alt-country crew’s first foray feels like a shiny plastic copy.

See, Lost Friends sounds built primarily for radio consumption. With the exception of piano ballad ‘Hole’, nearly every song coasts in mid-tempo, & crests to the same stadium-level plateau, and taps the same generic platitudes about love & loss &, yep, trying to fit in. Hannah Joy’s definitely got the right pipes, though – while she can belt to the rafters (‘So Long Farewell I’m Gone’ exemplifies this – hot damn), she can also flutter like a delicate butterfly. Yet, she’s not that delicate, & certainly never crushed; 'Never Start', after all, sounds chipped from the same undiluted crystal as Feist. There’s this frustrating sheen over everything – likely from Fitz and Joy’s formal training – which makes the violins too syrupy to be sweet, the steel guitar too rustic to be real.

By the same token, Joy’s lyrics also lack any lived-in landmarks. The king of the underground in 'Edge of Town' stands in for a whole parallel universe of secret subcultures, the kind that can bewilder an outsider from the straight world. That’s a pleasant diversion for the imagination, sure – but you can hardly imagine that Joy spends any time in that underground, with her weak feminist assertion of “hey, guys – I got something on my mind”. 'Don’t Be Hiding' at least embraces honesty in relationships, but only on a superficial level: “I don’t care if your jeans don’t fit that well”. It’s a good message in a catchy song, sure – but here and elsewhere, Middle Kids fail to dig any deeper, as if some arbitrary PG-13 rating has barricaded the real guts and grit.

Of course, I can blab all I want, and the gang will still slingshot their way across the ocean to the biggest festivals they can find. At least Echosmith figured out that they couldn’t keep up the 'alternative' ruse; in their latest singles, the intrepid sibling trio ditched the cutesy jangle for industry-strength pop songs, the sort that those well-adjusted “cool kids” would listen to. Meanwhile, Middle Kids still want both massive fame and indie cred for their debut, a wallpaper pattern of tropes to blend in with the earnest songwriter zeitgeist. Unless Joy and the gang can claim a new identity outside the radio-friendly format, they’d best prepare for a limited shelf life in the collective consciousness.