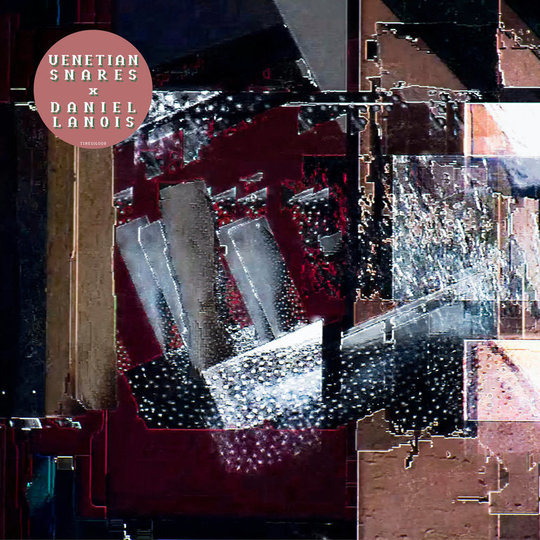 The new collaboration between Canadian musicians Daniel Lanois and Venetian Snares is simply called called Venetian Snares x Daniel Lanois. It is not abundantly clear what they were trying to achieve with this album, recorded in a former Buddhist Temple turned into a studio. Far from being zen like and contemplative, it is distinctly unsettled. At best it sounds like the earth moved and Lanois stayed on the surface creating melancholy sonic landscapes while Aaron Funk from Venetian Snares threw everything they owned into the earth’s cleavage and dived in after, making strange sounds as he skidded down into the abyss.

Funk is renowned for his intense breakcore. For this album he dials it down a notch, removing the many layers of sound and intense weight which ordinarily give it an intimidating if not breathtaking kind of intensity. The sound he instead brings to tracks like ‘Night MXCMPV1 P74’ barely tickle, it sounds distant, like the clanging of old pipes in the wind at the house of a recalcitrant neighbour.

The names of the songs have a distinctly ‘gear nerd’ kind of ring to them, as if they have been named after pieces of equipment, though perhaps coming from some kind of deep Teutonic literalness.

Much is made of the collaboration between these two artists, but it is notable they are both performing under their own names rather than inventing a new artist or group name to represent their sound. Rather than it being a true collaborative effort, where the two artists come together to produce something that sounds entirely different to what they usually do, they have both bought together their own sounds and layered them on top of one another. Songs like ‘Untitled P92’ and ‘Mag11 P82’ sound frenetic, the jittery clang akin to a bell ringer with arthritis is backgrounded by longer sustained notes and calm passages by Lanois.

‘Best P54’ starts to come closer to sounding like a unified sound, as the ethereal track by Lanois takes sounds fleetingly like the distant fuzz of an untuned radio. In ‘Mothors Pressroll P13’ the endless zigzagging of Venetian Snares almost coordinates itself with Lanois string-like requiems, but not for long. The moments of unity sound accidental and haphazard, ambient music with the occasional breakcore eruption, as if a child was operating two stereos playing each artist and alternating turning the volume up and down on each one.