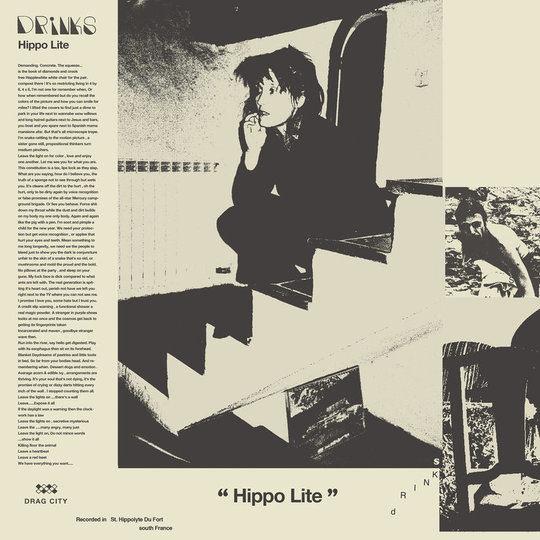 In a case of life imitating art, Drinks decided the way to follow up their debut — 2015’s Hermits on Holiday — was to seclude themselves in a remote French village to record its follow up. The second album from Cate Le Bon and Tim Presley carries the same sense of freedom as their first outing, this time a bit softer and more song-shaped than their debut’s meanderings.

Hippo Lite, named for the French village of St. Hippolyte du Fort where they recorded the album, has the feeling of benign isolation that comes from intentionally removing yourself from context. It feels like being on holiday, that boost that makes you feel like you can try anything once, manifested here as warped pianos and violins that want to be slide whistles. Even Le Bon’s whoops on 'Ducks' stretch out the quality of her voice beyond a mere test and more towards the realm of knowing that no one is expecting her to be too serious.

The aforementioned softness, though, is the departure that suggests a break from Le Bon and Presley’s day jobs. While Le Bon’s influence is felt much more clearly this time with her distinctive guitar style making her contributions more obvious — 'Real Outside' sounds like it was skimmed from her Crab Day sessions — much of the album is framed more in the soothing than the ramshackle. Album opener 'Blue from the Dark' could be lifted from a Simon & Garfunkel album if there weren’t a teasing violin and a typewriter thunking away under the acoustic guitar. That same playfulness is felt in 'In the Night Kitchen', whose opening frog croaks are replaced by a soft bass mimicking frog croaks. Album closer 'You Could Be Better' lyrically broaches the serious but is still a skipping melody of jagged violin and loping synths.

Hippo Lite as a whole represents that shift in attitude (or maybe in life) where quirky can be subtle instead of boisterous; where new skills and ideas can be factored in instead of flashed about; where nights with friends involve playing boardgames because you all just want to catch up. Stepping away from what you know can be a raucous experiment, but it can also be scales played on the piano and recordings of children laughing. It’s amazing how a little time away can make these options seem equally adventurous.