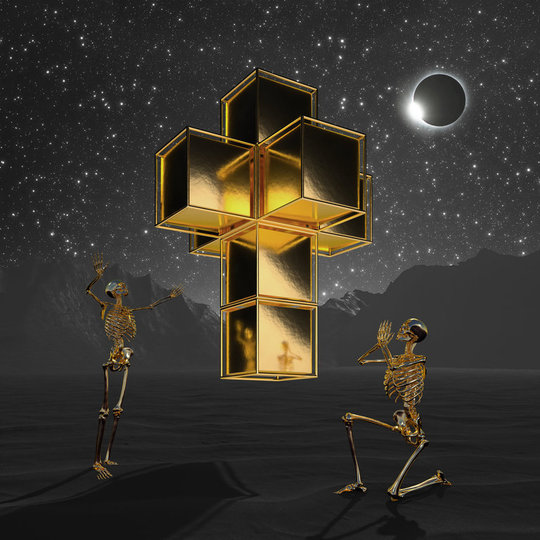 Grunt. Here we go again. Someone tells me they’ve got a new party-worthy phenomenon on their hands, some genuinely wacky twist to deviate from the faceless plastic of mainstream radio. Well, OK. You’re talking to the white chick that danced two hours straight at an Egyptian Lover show, who still bears the residue of Black Light Dinner Party on her right wrist, and Totally Extinct Enormous Dinosaurs on her left. No one would remember this junk unless they could dance to it, and by 'dance' I mean 'transcend unconditionally and shamelessly into a state of kinetic euphoria' – which, in my view, is a completely legit way to validate a song’s value. And now that I’ve been stranded in a part-time purgatory where DJs win over hesitant wedding guests and prom kids with 20-yr old detritus that most critics would disassociate from in a single downbeat, I can say that with even more emphatic authority.

Wherefore art thou, then, Gold Casio? Portland’s home-baked debasers of Catholic regalia first assailed the wide world last summer with their Fever Dreams EP, a legit nu-disco hustle that burns, baby, burns from front to back. You’d think that a group so dedicated to this flashy idolatry – hail ridiculous vocoders, hail laughably bad rap verses, hail bass vamps and the 808 forever and ever - would push forward on the throttle for more action in the new year. Yet the next chapter in the Gold Casio’s holy book, Sinners, actually scales back the hijinks – and the polished chalice offered here does not appease the Dance Gods one bit.

At the very least, our disciples of groove have blessed us with one bop. Namely, the cosmic lounge of 'Street Magic' glistens with irreverent nonsense, the sort that ageing disco ducks can cruise to on repeat. It’s a shame, though, that the song only bumps through its lush flute foliage for barely four minutes, and not the 20 minutes that my copy of the MP3 promised me – c’mon, y’all, your extended dance mix awaits! Ugh.

Indeed, if Gold Casio knew what was best for them, they’d milk every last sequin out of “Street Magic”. For, quite rudely, the rest of Sinners spins us back round into the forcibly sleek world of disco-inflected indie IDM, which saps your quirky narrator’s will to even gyrate in her seat. “Dawn Awakening” is probably the worst example, a slavish techno grind paired with vanilla guitar leads that even those aforementioned analog schmucks BLDP could wrangle with more conviction. (Fuck me, I reference BLDP too much. Shoot me dead, though, cos I’m listening to the six-year-old 'Leave It All' now and STILL wanna get up and romp. Damn.) The title track infuses some earnest pop balladry into the mix, and that’s mildly bearable until you recall that Austra and Rose Elinor Dougall both cornered that market with far more nuance last year.

If you lower your bar just a tad, though, the errant dancer can maybe still salvage some moves out of Sinners. Granted, “Make You Mine” drips with the sort of maximalist mentality that more evokes the testosterone reek of LMFAO than any ABBA – but if it bangs, it bangs, says the DJ. And the Gold gang at least injected their ass with some liquid funk on 'Lake of Fire', although that Kool-Aid has been nearly watered down with Maroon 5 layers of industrial-strength window cleaner. Blech.

So – while the concept of Gold Casio certainly tickles the dance-depraved appetite, Sinners just doesn’t serve justice to the four-piece’s wacky designs. Only 'Street Magic' descends from the extraterrestrial heavens above to deliver us from dull plastic pop standards; the rest succumbs to the pristine stupor of earthly trappings. I’ll seek my redemption from far less polished cults, thank you very much.