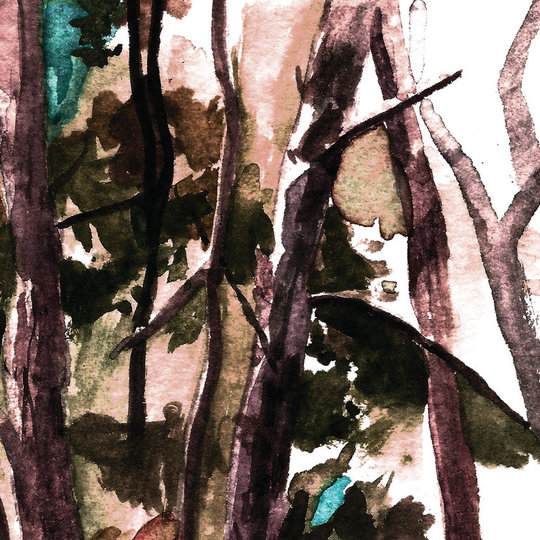 Frances Quinlan’s transition from solo artist to Hop Along band leader resulted in one of the decade’s most beloved Saddle Creek releases in the form of 2015’s Painted Shut. A harder-edged, more cacophonous younger sibling to 2012’s breakthrough Get Disowned it did, however, suffer from a little kitchen sinkery, with the incredibly well crafted songs sometimes submerged in a world chaotic, if beautiful, noise.

Bark Your Head Off, Dog sees Quinlan shift away from the feedback drench of some earlier recordings and deliver a complex set of danceable, gorgeous pop songs that retain their indie sensibility while never being afraid to push the envelope stylistically.

The funk-punk beats of opener ‘How Simple’ set the tone admirably, Quinlan’s brother Mark an essential component of the band’s sound behind the kit, propping up interweaving melodies and harmonies, then launching them into a climactic, layered build-up and violin driven kiss-off.

On ‘The Fox In Motion’, a celebratory, contrastingly sad song with a big ol’ shakers aloft Tanya Donnelly-style chorus, juddering Eighties palm must and talk of beaches, foxes and friends give a John Hughes feel that’s inescapable - the Daft Punk sounds of the outro raise a dumb grin in response to the musical smarts.

On more 'traditional' material like the ornate yet scratchy brilliance of ‘Somewhere A Judge’ we get a taste of Quinlan’s edibly delicious phrasing - “Afternoon vanilla sun crawls across the lawn” contrasted with the self-analysis of “I don’t know why I’m so mean each time I come to visit”. The jerk-math rhythm feeds a halt and cascade structure tempered by sudden, silly, lovely vocoder action that ups the joy levels considerably.

‘One That Suits Me’ soars, Quinlan’s voice so filled with yearning, stoicism and pure glee it’s impossible to not be moved as she roars “The sun is yellow and the ground is moving”. It’s transcendent stuff.

The clockwork, strings-based ‘How You Got Your Limp’ is slight but impressive in its craft while the tender bruise of ‘What The Writer Meant’ boasts a banging chorus and a Dinosaur Jr squall of geetar. The album’s layers and shifts are a marvel - the volume reduced but the impact increased tenfold.

What appears to be a solo acoustic venture late on with ‘Look Of Love’ morphs into a Seventies FM radio hit before your very ears, heralding not only Quinlan’s best vocal performance to date (it’s acrobatic in the most jaw-dropping way) but also perhaps the best example on the record of a kind of cleverness it’s hard to ignore - each magical, shining moment is gone before you really have a chance to get a hold of it, like a sweet bloom of love or a rush of nostalgia the music moves on to its next adventure, sweeping you along with it.

Closer ‘Prior Things’ takes everything up one more gear, offering us a fast and frantic honeydew sweetness musically while tossing out lyrics as striking and downright frightening as “Just a few minutes after taking them I realised - hundreds of buzzing flies were all over me”. Yikes. “I’m still in my prime” counters “You’re stealing my time” at the album’s close - that counterbalance of light and darkness put into words, the dual nature of the leaping, diving soul of their music given lyrical shape.

As the record fades into heavy fuzz we’re left with our heads spinning and hearts filled, searching for the play button for one more trip on this carousel, so fit for purpose now that Spring and Summer are upon us. Stepping away from the noise and taking an evermore artful approach to heartfelt pop is a bold, brilliantly smart move and on Bark Your Head Off, Dog the results are borderline magical.