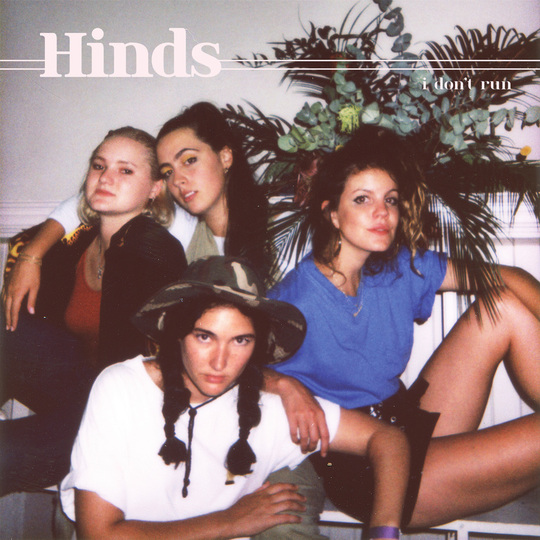 'We enjoy talking about sad things with a really cheerful [sound],' Hinds guitarist and vocalist Ana Perrote recently told The Fader. “That’s why people think we only talk about having fun and parties. That just proves that no one reads our lyrics.”

At surface level, the Spanish four-piece seem like a fun and parties band. A first listen to any song of theirs – take ‘San Diego’, for example, or ‘Bamboo’ – and you’ll immediately be charmed by their off-kilter, lo-fi guitar harmonies and the vocal interplay between Perrote and Carlotta Cosials. Their upbeat brand of garage rock infused with sweet jangle pop is full of sunny, beer-spilling fun that recalls Black Lips, Ty Segall or Twin Peaks, but on closer listen, it’s not simply just about the glory that is the recklessness of youth (though some lyrics do tend to cover that). The light-hearted melodies act as a mask for themes of heartbreak, of love and loss, of loneliness and disillusion. These were themes explored in Hinds’ 2011 debut record Leave Me Alone but are multiplied and dissected more forcefully (and painfully) on second effort Don’t Run.

The Madrid band don’t stray too far away from their beloved ramshackle pop instrumentation with their latest release, but they amplify on all the elements that made their debut so memorable. The lyrics – catchier than ever – are refined and sharper, the basslines manage to cut deeper, and the guitar solos evoke an entire spectrum of feeling to create for an output that is a much more sophisticated and developed foray into songwriting. The band don’t push themselves past the realms of perfectly imperfect slacker-pop anthems, but these are the qualities that make them so beloved. With guitar music experiencing a drop-off with too many white-male indie acts doing the same thing every album, Hinds are a glorious breath of fresh air.

'I would love to prove that for girls, rock music is not a game. It’s not just a small moment in a woman’s life. It’s my reality,' Perrote said about the album. I Don’t Run is a love letter that embraces the joys and pitfalls of being young, alongside push-and-pull of all the heartache and happiness in between. It’s fair to say that she has, and more.

Lead single ‘New For You’ takes all the beloved qualities of Hinds and re-delivers them tenfold. It’s more solid than any track taken from their debut, which is something that is perhaps reflected from a shift in their recording and production process. Whereas Leave Me Alone was recorded in a breathless rush – in between touring the entire world, with some tracks re-vamped from old demos and the band able to showcase much of the LP live in the lead-up – I Don’t Run feels more different, and feels more whole. With more time to think about it and then write it with having to be interrupted with overseas tours and the madness of still being a relatively young band, Hinds use their experience to hone in on their most solid collection of songs. Co-produced by Gordon Raphael (The Strokes, Regina Spektor) and mixed by Shawn Everett (Perfume Genius, The War On Drugs) in Paco Loco, Spain, ‘I Don’t Run’ has the band targeting their strengths and pushing them forward. ‘New For You’ is a joyous amalgamation of happy/sad – Perrote and bassist Ade Martin gleefully sing “I just wanna know it’s over!!!” – amid Cosials lamenting about how she is working about becoming a better person – be it for herself, for a lover, or for even her bandmates.

With ‘Soberland’ and ‘Linda’, the instrumentation and structural approach to each track seems more distinct and meticulous. The vocal interplay between Cosials and Perrote shines brighter than ever, a slick device to provide each other with both solidarity and support amid the thematic malaise of the lyrics. There’s a certain toned-down delicate to each track – they are slower, more measured – but with riffs that are sweeter than ever, taking a liking to The Pastels or Beat Happening. ‘Tester’ is a track that recalls the more biting and juvenile attitudes from their first LP, while ‘Finally Floating’ – the best track on the record – recalls the pain of being unable to escape the person you’re trying to forget about when they slither into your dreams: “I need to stay awake tonight/ because you’re slipping in my mind / ‘cause when I’m finally floating/ I know what the dream’s gonna be about”. Cosials’ guitar riffs manage to sound like an entire verse of their own, capable of echoing sentiments of loss and longing so aptly in ways that words cannot.

Hinds are here to have fun, whether you like it or not. They may not push past boundaries they are comfortable with, but they have identified the qualities that make them special – carving out their own niche in the modern music spectrum of loveable lo-fi embedded with off-kilter charm.