The Louder I Call, the Faster It Runs 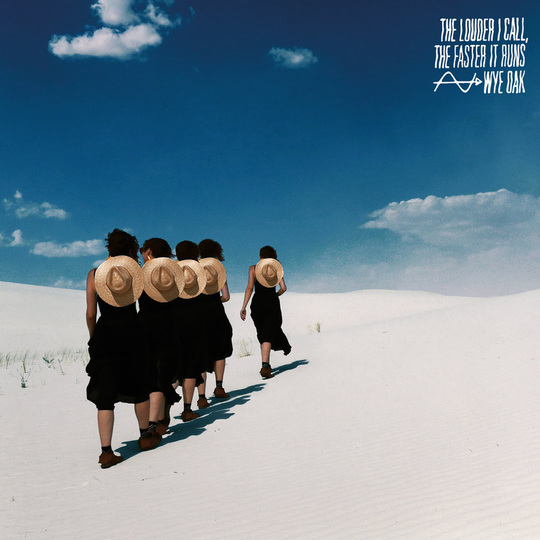 Wye Oak’s latest record opens with the quietly dissonant sound of a host of instruments tuning up. It’s an enigmatic introduction that gives nothing away about what’s coming next - which is precisely the point.

After all, attempting to predict where Wye Oak might go from one album to the next is, by this point, either brave or stupid, depending on how charitable you’re feeling. Jenn Wasner and Andy Stack were still teenagers when they began playing shows under the name Monarch in Baltimore 12 years ago; they renamed themselves after the one-time state tree of Maryland shortly afterwards, although they now put down their roots in very different parts of the country - singer-guitarist Wasner in Raleigh, North Carolina and drummer Stack in Marfa, Texas. They self-released a noisy and endearingly chaotic debut, If Children, in 2007, and followed it up in similar fashion with The Knot a couple of years later.

Both of those albums were a lot of fun, but they offered little indication of the band that Wye Oak would emerge as with their breakthrough LP in 2011. Civilian was staggering, and not just because these scrappy punk kids had delivered it so assuredly out of left field; by anybody’s standards, it played like indie rock as opera, all rolling drama and emotional tumult and towering waves of reverb. Unless somebody else has something outrageously impressive up their sleeves for release between now and the end of next year, Civilian will likely go down as the best album of its genre this decade.

Wye Oak haven’t made one like it since. The follow-up, 2014’s [Shriek](http://drownedinsound.com/releases/18195/reviews/4147683\0, was a disarming diversion; Wasner was worn out from the road and suffering from severe writer’s block, right up until she realised that the two were interlinked, connected by her boredom with the guitar. She swapped it for synths and traded Civilian’s heart-on-sleeve surface for a sonic serenity that belied the incisively personal lyrics. A lot of bands talk the talk about not wanting to retrace their steps but few actually deliver on it. Wye Oak did a complete about-face, both in terms of the sound of those albums and the way in which they were made; Shriek was the first LP from the previously close-knit pair to be made remotely, with the two on different coasts.

Wasner and Stack have largely remained apart since, save for a handful of shows a couple of years ago to mark the release of odds-and-ends collection Tween; the former made a fabulously poppy solo album under the name Flock of Dimes, If You See Me, Say Yes, whilst the latter toured with both EL VY and Lambchop. They worked on The Louder I Call, The Faster It Runs the same way they did for Shriek; developing different ideas in different cities and different mindsets, and then piecing it all together in week-long bursts. It tells, too; Shriek was a smooth, cohesive record, but The Louder I Call is thoroughly impressionistic, following no set aesthetic or manner of construction and instead becoming the first Wye Oak album to genuinely defy categorisation, to laugh in the face of stylistic pigeonholing.

Wasner’s solo outing saw her taking responsibility for every part of the process for the first time and it has done her a world of good; partly because of the sweeping confidence with which she’s approached the experimental nature of The Louder I Call and partly because you get the sense that the experience might have heightened her appreciation of her creative relationship with Stack, a versatile musician who has long been playing drums with one hand and keyboards with the other on stage. His fluid percussive approach is one of this album’s two key anchors, shifting shape to match the rest of the rapidly evolving instrumental palette without ever taking centre stage or becoming a distraction.

Stack follows Wasner wherever she goes, but she has a foundation all of her own, too; her voice. Like Stack’s playing, Wasner’s vocals are pliable and bend to the direction of the given song, but they’re distinctive enough to lend the whole album an emotional throughline. That’s less because of the actual sound of them - they’re neither honeyed nor harsh, instead occupying a middle ground between the two - and instead because Wasner delivers her words with so much conviction that she could probably sell drugs to a nun if she put her mind to it.

That’s of crucial importance on an album that carries as much emotional heft as this one; Wasner tackles existential crises, the ceaseless horror of the 24-hour news cycle, the disconnect between social media personae and our real selves, the disparity between the availability of information in the internet age and our ability to process it and, on the deeply moving ‘Lifer’, she chronicles a lifetime of guilt about the luck of her own circumstances compared to that of those around her. She’s trying to be kinder to herself without collapsing into blind self-interest: “I have to love the life I make / make up for all the space I take.”

That balance of feeling suits Wye Oak down the ground; after all, this is a band built entirely around a personal and creative push-pull. With Stack’s subtle directorial hand and Wasner’s self-awareness creating the bedrock, they’re free to spend the rest of The Louder I Call exploring their every whim and indulging their musical impulses. Accordingly, we go from the spiralling electronics of ‘It Was Not Natural’ to the delicate flutter of ‘Join’, via the skyward guitars of ‘Say Hello’ - and that genuinely isn’t even the half of it. The Louder I Call, The Faster It Runs is a symphony in freedom, and a potent testament to Wye Oak’s ambition moving forwards, the possibilities for this band are limitless.