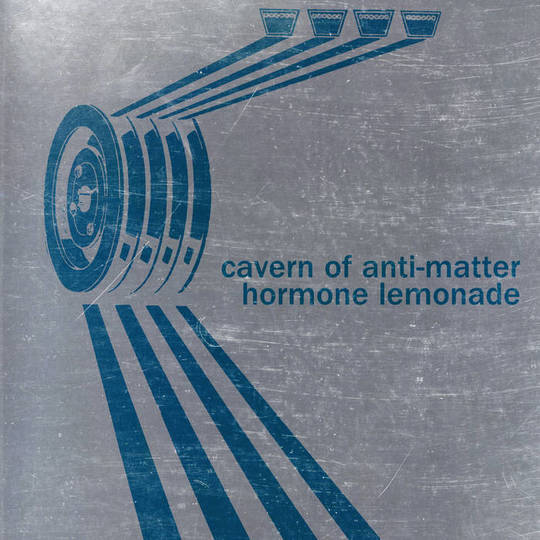 Mention the name Cavern Of Anti-Matter and it evokes memories of Primavera Sound 2016. Literal swarms of Radiohead fans headed towards the main arena in their thousands, meaning those of us with little to no discernible interest in Thom Yorke and co were free to wander aimlessly from stage to stage. Occasionally walking to the very front and setting up camp there for the entire duration of the set if something took one's fancy.

One of those sets in question would be Cavern Of Anti-Matter's. Then the relatively new project of Tim Gane, himself never averse to operating left of centre throughout his three-and-a-half decades in music. Having previously steered the ship for confrontational heavily politicised indiepop (and favourites of the Manic Street Preachers) outfit McCarthy during the second half of the 1980s, Gane then went on to form Stereolab alongside partner Laetitia Sadier after his first band's dissolution, again confounding expectation with every subsequent release until going on an indefinite hiatus eight years ago.

Indeed, it's this quest to continually strive for making something new with as little compromise as possible that's led Gane to where he is now. Having initially got together with drummer Joe Dilworth - also a former member of Stereolab - and electronic musician and all round mechanic Holger Zapf in 2012, Cavern Of Anti-Matter was born amid a shared love of all things Kraftwerk, Neu! and Pete Kember's (aka Sonic Boom) experimental synth project E.A.R. Based in Berlin, which suits their penchant for all things associated with the German music revolution of the seventies and eighties, Cavern Of Anti-Matter have continually developed since their conception into a well oiled machine that takes bits of inspiration from the past and builds them into a very futuristic sounding present.

Hormone Lemonade, their third long player on their own Duophonic imprint proves a veritable exercise in crafting electronic music that's both pertinent and timeless. Kicking off with an epic sixteen-and-a-half minutes long piece as they've done here might be a bold move, but by way of introduction to the trio's latest opus, 'Malfunction' serves its purpose and more. Sure, there's elements of Kraftwerk's 'Autobahn' in its mechanical structure as Zapf's Taktron Z3 and Taktron Z2 synths - constructed especially for these recordings - rumble along efficiently at the forefront. Both challenging yet engaging at the same time, 'Malfunction' sets the standard for what follows, none of which disappoints.

Another of Dilworth's former outfits Add 'N' To X (check out their excellent LP Avant Hard from 1999 and in particular 'FYUZ') spring to mind on 'Make Out Fade Out', arguably the most direct composition here which also references Suicide in part. Indeed there are traces of (post) punk's more radical luminaries throughout Hormone Lemonade. 'Solarised Sound' could be a late Joy Division or early New Order outtake, its intro eerily reminiscent of the former's 'Transmission' before an icy synth takes control over a regimented machine driven beat made to soundtrack the wake after the death disco.

While 'Motion Flow' and 'Remote Confection' also co-exist in a futuristic world engineered by outfits like Cabaret Voltaire and The Human League. Avant garde and perverse in nature, yet melodious and linear to the point where the former segues into the latter ensuring continuity prevails throughout both pieces. Elsewhere,'Automatic Morning' glides along a similar motorik driven path to Hookworms and Soft Walls' transient electronica, before the minimalistic 'Phantom Melodies' provides a funereal detachment at Hormone Lemonade's close.

Devotees of Stereolab will be delighted to hear 'Phase Modulation Shuffle' could easily have slotted on any of the aforementioned's last three albums. While also hinting that band's hiatus might not be as permanent as initially suggested. More importantly, Hormone Lemonade is an endearing listen that focuses primarily on the here and now, and as a result messrs Gane, Dilworth and Zapf have every reason to be overtly satisfied at their latest creation.