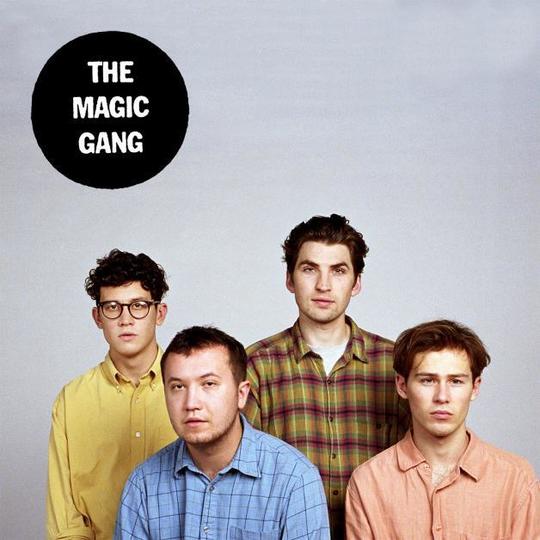 Much-discussed Brighton band The Magic Gang release their first album to the most anticipation we've seen around a debut for a while, which is remarkable considering the supposed lack of interest in guitar bands in the industry currently. The self-titled The Magic Gang runs at 12 tracks, with the four-piece group selecting carefully from their raft of early-career fan favourites and their newer, different sounding music. With a large bank of songs from the past few years, listeners can expect the cream of the crop; a kind of early greatest hits from the band whose first LP has been in the works for some time.

Currently suffering the predicament of many new bands of being mainly defined by and compared to their influences, the Magic Gang’s situation is nothing new, and the members have extensively discussed who they look up to. What is novel about the band is their seamless approach and combination of a very mixed bag of musical styles. Opener ‘Oh Saki’ does sound like The Cribs, but on ‘Take Care’ they also sound like a reincarnated Beach Boys (not a criticism ). The Magic Gang pulls off this array of sounds with mastery, performing the exceptionally difficult trick of drawing together all the circles to create a near-perfect Venn diagram intersection. Each track is diverse and different, whilst still sounding like it resoundingly belongs to them. Bustling with exuberance, the songs combine simple yet effective lyrics with sumptuous harmonies and memorable hooks.

The first half of the album is characterised by high energy, fast-paced songs, best shown by raucous singalong ‘All This Way’ and ‘Getting Along’. At points these are in danger of blurring into each other but I think this may just be because of the specific order they’re listed in. One song which has the tendency to cloy is ‘Caroline’, perhaps just because of the repetition in the chorus. However, it’s more than redeemed by the other tracks at the start of the record.

The second half of the record is quieter, with a more musing outlook. ‘Slippin’ provides a combination of quieter verse mixed with the more energetic tones and sunny guitar chords seen earlier in the tracklisting, while ‘Your Love’ declares morosely: “I feel the rain roll down the windowsill, if I could only feel your touch”, perhaps one of the first points in the album where the lyrics have felt more important than the sonic elements. Defiant, punchy ‘How Can I Compete’ adds a dash of bittersweet stubbornness to the works. Final track ‘All That I Want Is You’ has been inspired by the memoirs of the Beach Boys’ Brian Wilson, and is strangely winning, although I’m not sure I 100 per cent understand what it means yet.

This album is extremely enjoyable, filled with a wealth of emotions and exquisitely executed. The exciting uniqueness of the Magic Gang makes for fantastic listening and I’m really looking forward to seeing what else they have up their sleeves.