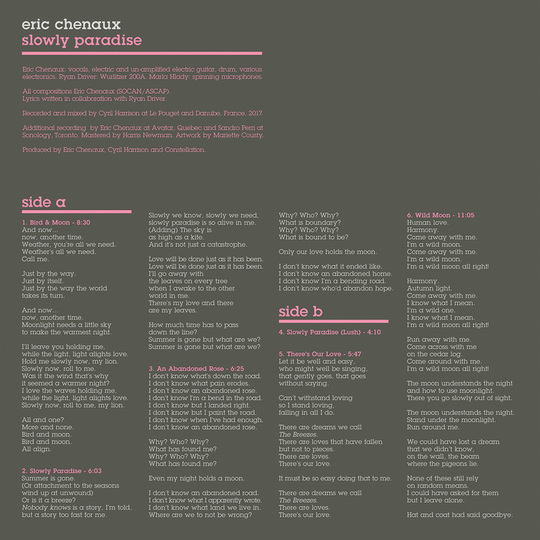 Picture yourself on a balcony. The stars are out, and you can actually see them, because someone has stretched time out like a slinky to meet you here. This someone can’t be seen, per say – you have to trust that the goblets and the bottle of red left on the table was his handiwork, and that the second chair holds more than a freshly clipped rose. But this hour is yours, at least – whether he’s here or not, you can at least claim that. And, as you ease into the first chair and sip from your glass, the unfamiliar solace that slips into you seems to affirm that someone has, at least in gesture, carved out this moment for your benefit. The full moon glides out from a passing cloud, and something more than peace and grape juice coats your throat.

Am I being fanciful? Maybe. But if I began with 'living legend of the Montréal improv scene drops new album', you would see the Eric Chenaux that the rest of the world sees: the quizzical professor-type, like an Eric Clapton that teaches anthropology and elective English classes on folklore. Slowy Paradise, however, doesn’t sound like an ambitious art project, or an exhaustive study in tradition, although any deep dive with Chenaux dips out of the modern hustle-bustle. No, our esoteric pedal scholar has worked some strange charms out of the wonky ink first laid out in 2013’s Guitar & Voice, and stroked more intensely in Skullsplitter two years later. This is the organic culmination of our protagonist’s most singular travels, and he’s reached a most puzzling bliss.

See, to begin with – I’m not the type of person anymore that really obsesses over guitar techniques. But the way that Chenaux meanders on guitar is a thing worth obsessing over. I literally can’t figure it out. Sometimes a solo squawks in like a kazoo played in a megaphone, like in the first few seconds of ‘Bird & Moon’ and ‘Wild Moon’ (yes, that’s two moons, and we’ll discuss this). In other places, guitars wobble around as if he’s unwinding the strings in real time, like in the babbling creek of ‘An Abandoned Rose’.

And this should sound awful, but it doesn’t. Maybe the gently swaying curtain of wah-wah wash softens the glare? Maybe Chenaux’s easy Nick Drake croon does the trick – a beaut of a croon, the invisible lover on the balcony, the gentlest maturation of a voice one could hope for after stepping out into the spotlight a decade ago? Yes, and yes, but then also no. The 11-minute odyssey of ‘Wild Moon’ has no wash, and the kazoo-guitar wafts in each time like that bari sax player– you know the one. Not the professional one that’s hired at weddings to piddle around while everyone talks over him, but the guy who somehow lugged his gear into the subway station underground and fiddles around, beholden to no one’s rules save for his own stamina, and you’ve no choice but to listen as you await your train.

That’s another thing about Chenaux’s solos – the meandering, the weaving in and out between the caramelized core of each song. I can point to particular moments, but Slowly Paradise best makes sense as a single session, or maybe one segment of REM sleep. Textures do repeat, the tempo remains a leisurely gamble, and Chenaux muses over motifs – moonlight, the night, slowly, our love. But in dreams, the repetition starts to blur – you trick yourself into déjà vu, recollecting dirt roads that you’ve never tread upon and people that you’ve never met. And you can’t tell yourself it’s wrong, because dream logic demands that it is so. Chenaux’s stumbling, then, creates an oneiric whole – a romance, yes, but casually surreal, with shaky cameras and unexplained backstories.

Still – and I can’t emphasise this enough – Chenaux sounds so relaxed. If Slowly Paradise can be classified as 'experimental', then the experiment is to dismantle the aggressive showboating that usually entails improvisation, to create rather than consume space. You can’t see him on the balcony, but he’s there, suspending time with a slinky so that you can sink into his abstract embrace.