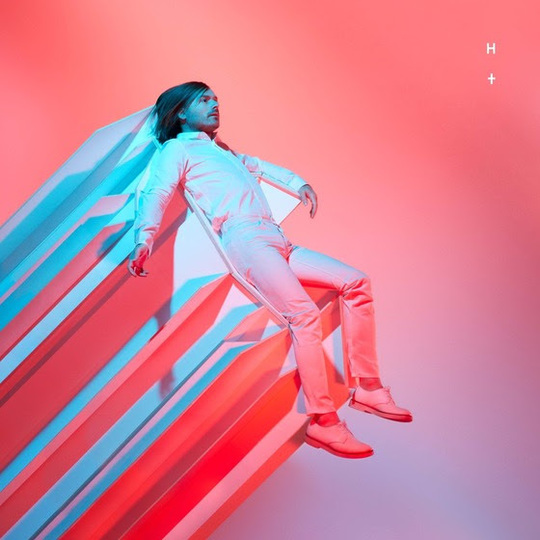 JB Dunckel is best known for his work with Nicolas Godin as Air, they of the landmark 1998 double platinum debut album Moon Safari. The gentle downtempo synthpop album referencing the stars and naive heroines was a clear change of course from the crunchy electro of fellow French band Daft Punk, and the album was a success. Dedicated fans of Air may be satisfied with J B Dunckel’s new album H+ with its low tempo pop music and songs with titles like ‘Space Age’ and ‘In Between the Two Moons’ and the heavily accented whispery vocals. It’s a well-crafted pop album, but with some clear shortcomings.

H+ is a response to the kind of incorporation of technology into the body, with tracks like ‘Transhumanity' proposing a idealistic melding into our devices, and each other. Technology is the answer to the disruptions facing humanity, a Heideggerian form of advancement which promises to extend our reach. As tracks like ‘Hold On’ and ‘Transhumanity’ illustrate, this is usually into some kind of cordless anti-gravity frontier where we are young, immortal and have great hair, the same idea which underpins cosmetics and IT advertising. '[A] blissful state of floating in space via alpha waves of pure pleasure', says the PR release. This of course becomes the graphic concept for video clips and album art designed by Paris studio Akatre, and the wispy synth pop sound, so with spacious subtle melodies giving the impression of something that had never touched the ground. It’s a VR botanic garden in neon, with the occasional relaxed body floating by.

This is a solid concept, one that sold quite well for another electronic artist who started out in the Nineties, Björk. Her 2011 album Biophilia, with songs like ‘Cosmonogy’ and ‘Moon’, and visual imagery of spores, roots and shoots, and the accompanying iPad app, is now part of the permanent collection of the Museum of Modern Art. The lauding of technology is a reasonable artistic concept, but also a bit arrogant. Do we really think we are so fantastic we deserve to overcome the universal laws of physics? Is prophesising total disconnection from our own planet really such a great idea at a point in time where we should be working out ways to stop fucking it up? Is this an imagined future or a form of predictable escapism?

And then there’s the music. If you are a fan of Air, it should keep you happy. Most of the songs are based on the recognisable patterning which underlies so many Air songs, the strong steady rhythmic passages underlying dulcet melodies. Tracks like ‘Ballad Non Sense’ are relaxing, well produced, sweet and ambient. ‘Carpet Bombing’ is surprisingly upbeat, proving the album can straddle both the ambient and dance categories of electronic music, like Air but with a kind of honky tonk pop ostentation. ‘The Garden’ is treacly synthpop so viscous it practically drips, forming sticky puddles. ‘Love Machine’ is so epic it's like ‘Chariots of Fire’ was turned into a video game.

It’s not bad, but the repetition of the style and the whispy vocals are not particularly exciting either, at least not as exciting they were the first time. Fans of Air should appreciate it. Fans of Air who never moved on should love it. I personally found it a little repetitious and nostalgic. 'I use the sound experiences of Air; I just extend my Air sound in a solo setting,' Dunckel explains on his website. 'I don’t renounce the past, in fact I exploit it quite openly.' Perhaps a little too openly and easily.

There's a Riot Going On