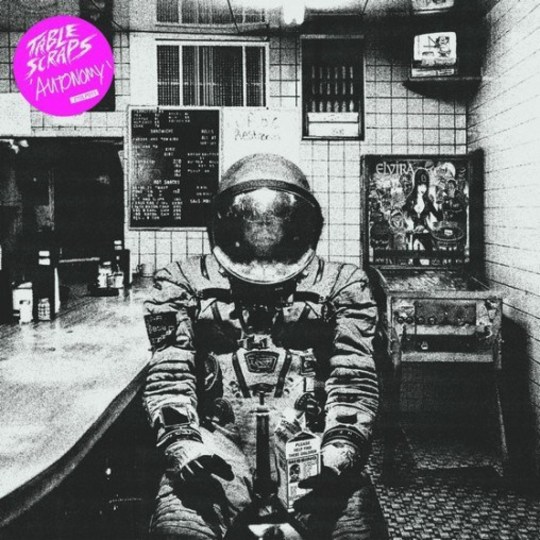 Based on the strength of their first offering and the way they’ve carefully and credibly built their already strong foundations on the DIY circuit, Birmingham trio Table Scraps might not be hoovering up the crumbs from the feasts of others for too much longer.

As an outfit, they leave the distinct impression that they know exactly what they want and aren’t going to settle for anything less, even at this early juncture. Everything about them - from the aesthetics of the band, to their music videos and their self-produced output - feels considered and on-point.

On newly released debut album Autonomy, their sludge-imbued garage punk undoubtedly owes a debt of gratitude to the likes of The Cramps and Turbonegro, but picks and chooses its influences carefully and smartly across a span of decades from the rock’n’roll history books.

There’s a culture around this trip of a record that’s hard to deny, one that’s steeped in the US traditions of Dinosaur Jr and the MTV explosion, but also borrows heavily from the UK garage rock scene of the Sixties and throws a dash of hometown heroes Sabbath into the mix for good measure. All this is of course a long-winded way of saying that Table Scraps ooze cool from every greasy pore of their video-store-stalking, leather-jacket-clad malcontent bodies.

The band might be cooler than Putin’s salad drawer but, in much the same way as The Ramones were the masters of delf-deprecation and crippling-shyness, there’s also a vulnerability and a disaffection about the trio that’s glaringly obvious in song titles ‘I’m A Failure’ and ‘Treat Me Like Shit’.

In the lyrics of ‘More Than You Need Me’, as vocalist Scott Vincent Abbott yowls “I can’t do anything on my own, fail at work and I fail at home. I need you more than you need me, state of total dependency”, it’s difficult to refrain from grabbing him by his leathery-lapels and giving him a good talking to about what an excellent musician he is and how he should believe in himself a lot more. Where’s Andrew WK when you need him?

Elsewhere on the record there are plenty of sign that this band have got the chops to go a long way. The lead guitar and whistled hooks of ‘Always Right’ snake in a wonderfully hypnotic fashion over the driving, foot-to-the-floor skeleton of the song that’s locked down to within an inch of its life by the band’s excellent rhythm section. Drummer Poppy Twist and bass player TJ don’t have too many moments in the limelight – Table Scraps are all about that wailing guitar – but when they do they excel, and the rest of the time they’re as rock steady a pairing as any band could hope for.

Other highlights include ‘Takin’ Out The Trash’ which riffs cleverly on the more palatable aspects of The Fratellis (perhaps there’s a metaphor buried in that title for the displaced Scots?) but actually strays closer to the Norman Greenbaum classic ‘Spirit In The Sky’, albeit if it was played by a demented surf band who’d spent a bit too long in the back of the van on a 15 hour cross-state drive.

Shows so far with the likes of punk legends The Stranglers, Buzzcocks and The Gories seem a completely natural fit and should serve the band well in building their core fanbase, who even roam into psychobilly territory on the stomping, cosmic punk of ‘Frankenstein’, but the real beauty of Table Scraps is that they’re a band that could be comfortably at home on a plethora of bills. As long as the room is dark, dank and sweaty, this band will thrive like a psychotropic fungus.

Album closer ‘Do It All Over Again’ is an unexpected burst of sunshine at the end of a long, twisted night, the sort of track that lessons the comedown just enough to crack open the beer you’ve been suspiciously eyeing and start the next party. It’s the perfect end to a road trip that nobody will remember having taken in the morning, the only memento being the mountains of empty bottles and fuzz-fringed brain-fry that reminds you that yes, you did in fact see God last night.

Sure, there’s room to grow, and they could definitely benefit from stretching the poppier side of their output if it’s a direction they want to go in, but for now Table Scraps are that rarest of thing –authentically chic. They’re groovy. They’re hip, man. Don’t be a fucking square.