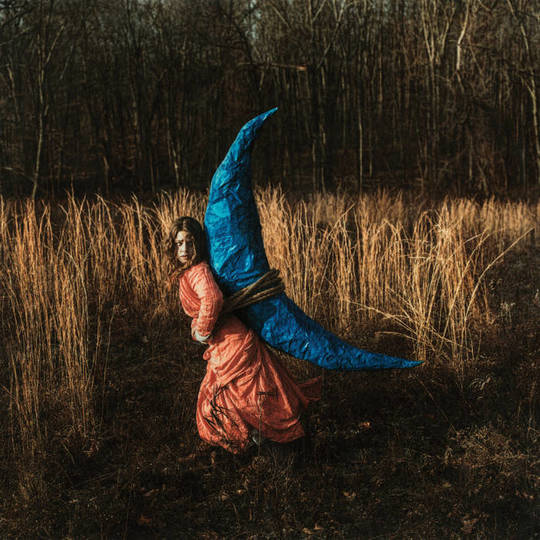 New York-based songwriter and long-time member of The Jealous Girlfriends, Holly Miranda, is releasing her fifth solo album, Mutual Horse. Starting from recording a vault-full of music which was never released, through to now, the singer has created a record which brims with authenticity, refusing to embrace a specific pattern or instrumentation. Miranda’s trademark of not sounding quite like anyone else thrives strongly through the new album.

Mutual Horse opens with a bang, with first track ‘Wherever’ utilising haunting chimes to back Miranda's passionately quiet vocal. The singing style is reminiscent of a combination of the tracks from Karen O’s ‘Crush Songs’, but heavier and grittier. Building and building, the song is almost euphoric, with Miranda completely behind the steering wheel, controlling the composition with ease.

‘Golden Spiral’ is introduced with a whole mix of instruments, including a trumpet (Miranda is self-taught, by the way). Again, Miranda’s stance is distanced and controlled, like a commentator on the events in the lyrics. The jaded lyrics, “Hear the shuffling feet waltzing down the street/ Hear the shuffling beat walking down the street” are clever yet fatiguing, the slow, plodding nature of the song underlines the implied lyrical suggestion of the track.

Each song is distinct and separate, which is sometimes hard to find in other LPs. One of my favourites is ‘To Be Loved’, made wonderful by Miranda’s matter-of-fact, unpitying delivery. “There’s no shiny place that I can go where losing doesn’t hurt like this”, she declares of her emotional state after a recent break-up. It would be easy for the song to dissolve into a melodrama, but the songwriting successfully walks the fine line between the two faces of the coin, with the simple yet effective refrain, “I only wanted to love and to be loved”.

Between each track, it’s as if Miranda takes a big breath and resets. Each section of the album is completely its own. Another beautiful track is ‘All Of The Way’, a piano-heavy, understated ballad which reflects on relationships and decisions. Its low-fi recording makes it sound like it’s being played at a party in the middle of the night until the other melodies come in.

Other tracks see the singer push the boundaries of expectation further. The hypnotic ‘Towers’ does this particularly well, with just over four minutes of running time spent ruminating over one lyric. Slow and sinister ‘Mr. Fong’s’ is contemplative and honest, and then frantic all at once. The 14 tracks span and encompass all kinds of emotion with a strong sincerity.

The record as a whole is exceptional, and Holly Miranda has mastered the art of making an album which is well-considered and comfortable, but noticeably different from earlier works. The album never reaches the heights of positivity and feel-good of songs earlier songs such as ‘All I Want Is To Be Your Girl’, but switches easily between moods at the drop of a heart. Mutual Horse is a feast for the senses, demonstrating Miranda’s potential. She is truly an underrated artist with exceptional talent and imagination.