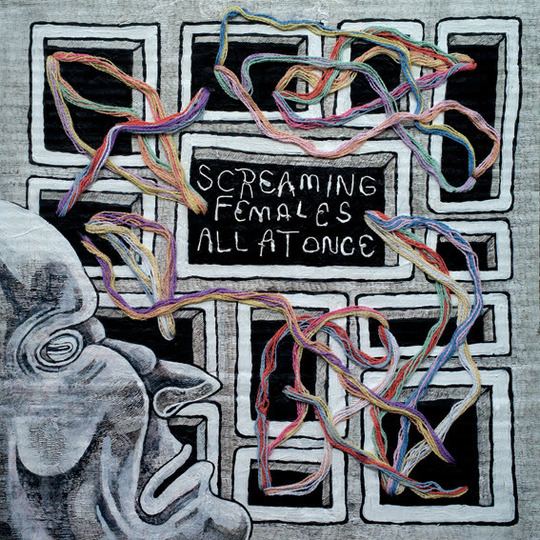 There was a feeling in some camps that Screaming Females’ 2015 record Rose Mountain was too tamed a version of the band. There’s no doubt that their sixth record tended towards a more refined model of the incendiary rock of their previous efforts. But they were also up against it, in that it followed their breathless fifth album Ugly, which is rightly regarded as a high watermark in the band’s history. Consequently, All at Once finds the New Jersey trio at an interesting point; to forge ahead and develop their sound, or return to Ugly’s dynamism? Turns out Screaming Females have rejected pedestrian, binary choices and made a record entrenched in the present.

The opening track ‘Glass House’ does suggest one element of their past they have reclaimed is firebrand spirit, but it’s also indicative of how their songwriting has developed. Structurally restlessness, it’s propelled by Marissa Paternoster’s gently applied vibrato that later contorts and writhes with frustration at the realisation that “my life in this glass house / impossible to get out.”

While she sings of entrapment, musically, the band have never sounded so liberated and zestful. Overall, this record expands and evolves their sound in often electrifying ways, but it’s also liberally seasoned with familiarity; namely, Paternoster’s powerhouse vocals and masterful guitar playing. ‘I’ll Make You Sorry’ proves yet again why she is so highly regarded a guitarist, as her shredding effortlessly dances around one of the record’s melodic high points, slipping in a mid-track fluidly vibrant solo. Whereas her vocal was less dominant on Rose Mountain it's once more at the fore, and this record stands as her best performance yet, where she embraces the quieter more subtle moments as much as roaring bombast.

The sheer quality of the tunes ensures there is very little to fault on All At Once. ‘Black Moon’ hits like a shock wave of jacked percussion, prowling bass, and circular guitar work. And while the revelation that “we all dream alone” might feel hackneyed in lesser hands, any triteness is tempered by the track’s bullish drive. While ‘Soft Domination’ toys with a toothsome power pop chorus, ‘End My Bloodline’ stalks like a hunter eyeing its prey, and ‘Bird In Space’ rings out a delightful ode to escapism. There’s real relish in the way ‘Chamber For Sleep’ sashays in with a cheeky flick of the hips, its dazzle and sparkle as surprising as it is delightful.

Those lighter moments are always fortified by grit, as on the Seventies hard rock riffage of ‘My Body,’ which is coloured by the dark request “when they come to find me / then please burn my body.” But even the inkiest mediations are quashed by the defiance inherent in the music. Similarly, it’s the band’s gift that they can switch from bombast to plain-sight vulnerability without missing a beat or disturbing the flow, as on the heart-sore ‘Deeply.’ The song’s death-march tempo is the first chance to take a breath from the ferocious pace, while Paternoster urges "play for me that song that you wrote hysterically loud.” The volume is duly ramped for the blazing closer ‘Step Outside,’ and it’s a fittingly thrilling way to sign off - with a maelstrom of arching guitar solos, powerhouse riffs and rippling bass.

There’s an ever-so-slight lack of the precariously raw noise that made Ugly so thrilling, but the crisp, imaginative songwriting redresses the balance. With their energy levels apparently insatiable, the unsparing pitch of the record could so easily have felt like prolonged bludgeoning, but to their credit, they apply a multitude of hues and details and those variations support the pace and brawn of the record. It really does feel like an album that draws on all that is great about Screaming Females and blasts it out with an unwavering spirit. As such, All At Once proves an apt title for their seventh record, which is the apotheosis of the band’s career thus far.