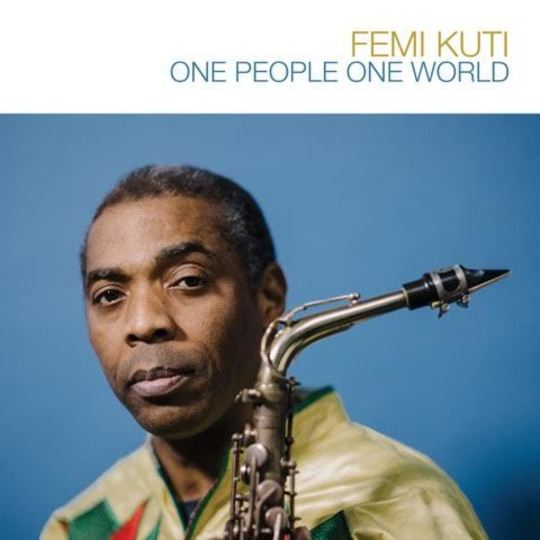 The frustrations that appear throughout Femi Kuti’s One People One World will be familiar to anyone with a passing interest in international news. The stories of despair that generally reach the UK from Kuti’s Nigeria are all present here but they appear alongside a call for resistance. He argues that Nigeria has been held back from its true potential by corrupt politicians and bad governance, as he and his father Fela Kuti have argued on many previous albums, and the stories of corruption and deprivation here are balanced with a message of hope. One day, the people of Africa will rise up against their rulers and run their countries for the people.

It’s a message that could be concerning in these sensitively populist times; the album’s opening song title ‘Africa Will Be Great Again’ is likely to suggest negative connotation for many listeners. But Kuti’s rhetoric is anti-authoritarian and optimistic. In fact, this album is so breezy and energetic that you might not notice the politics in it at all.

The music is a mixture of funk, Afrobeat, and soul; influences that Kuti has soaked up over 40 years of performing. It’s a style that will be familiar to anyone who’s followed his work in the past, or the work of other Afrobeat artists in general, but he does find little pockets of variation on this album. ‘Na Their Way Be That’ plays with a loose groove, led by a twisting, menacing saxophone riff, while ‘Equal Opportunity’ amps up the tempo to create a more South American rhythm.

However, the album mostly follows a very similar style; Kuti sings verses that read like political slogans, which he then punctuates with powerful blasts of horns. It’s an entertaining formula but also one that leaves the album feeling a little conservative. It feels unfair to compare Femi Kuti’s work to the music of his father but doing so sheds light on the problems with One People One World. Femi is a talented musician and band leader but he lacks the scathing wit and original turns-of-phrase of his father’s best songs, in comparison his lyrics can feel a little one note.

Take for example the lyrics of an album highlight ‘Africa Will Be Great Again’, where Kuti reels off a list of structural and economic problems and calls for investment in infrastructure and political reforms. He makes a fair argument but comes off sounding like a politician. Compared to the more abstract lyrics of his father’s ‘Zombie’ and ‘Water Get No Enemy’, it is uninspiringly straight-faced. It’s easy to support Femi Kuti’s message on One People One World but also wish that he’d delivered it in a more creative way.

The highlights on the album mostly come from the musical arrangements. ‘Best To Live on the Good Side’ has the album’s most invigorating horn arrangement, which rises and falls like Hollywood swing, and ‘Evil People’ brings out Kuti’s best vocal performance with a near-hysterical wail. Unfortunately, too much of One People One World meanders without enough memorable hooks or musical variety. It may have been better if Kuti had included fewer songs and let some tracks stretch past the 5/6 minute marks, allowing them to move into stranger territory.

Femi Kuti is still an entertaining performer and One People One World is almost tailor-made for live shows with its sharp performances and joyful tone. But listening to it on its own is a much less satisfying experience. These songs are too similar in tone and message, and unfortunately that makes for an undynamic album. The problem can be seen on the album’s closing track ‘The Way Our Lives Go (Rise and Shine)’ when Kuti sings that the glorious revolution of the people will come, it’s just a matter of time. But if Kuti is still singing about the same problems he saw decades ago, in the same style, and with the same intensity, the message falls flat. How are we to believe that this time it will come true?