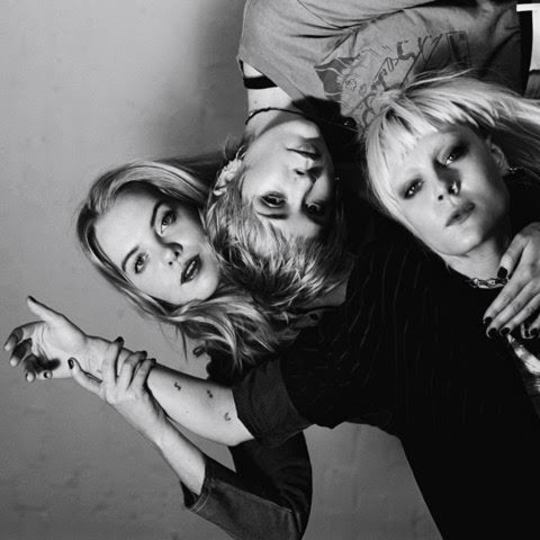 Imagine, if you will, that The Powerpuff Girls - after spending their teenage years devouring everything from Bikini Kill, The Bangles and The Sugarcubes to Madonna, Bowie, Blondie and The Spice Girls - ended up at art school in Brighton. That goes some way towards explaining the Dream Wife phenomenon: three astrological fire signs who came together as a result of a performance art project.

Following the assertive and rowdy opener to their self-titled debut that is ‘Let’s Make Out’, ‘Somebody’ lulls you in with mid-paced digestibility before really getting under your skin. Rakel Mjöll uses her theatrical chops to switch between the first person, someone dealing with “the experience of living in a female body within our society”, to a viewer in the track’s verses, who seems to have a more distinctly male perspective: “You were a cute girl standing backstage. It was bound to happen.”

Stripping away much of the track’s instrumentation, the song’s main refrain feels like the protagonist freezes in a moment of panic: “I am not my body, I am somebody”. Mjöll’s wordplay occasionally stretches “somebody” to “some body”, in what is an incredibly effective yet simple articulation of the female experience: constantly being made to feel aware of, and 'in' your body whilst, simultaneously, floating outside and above it, as though it is something that does not belong to you.

While ‘Somebody’ is an incredibly tough act to follow, ‘Fire’ has a one-in-a-million chorus that brings out all the giddy, teenage feelings of holding hands in the rain and running away with someone. The thrill of adolescence appears to be a potent source of inspiration for Mjöll: there are happy and aimless road trips to upstate New York in ‘Kids’ and the easy-breezy naivety and existential angst of ‘Act My Age’ soon gives way to the defiance of someone who has hardened and is now more comfortable in their own skin: “Do I amuse you? Do I confuse you?”

Alice Go’s nimble and brittle riffs, heavy on treble, fizz along excitedly and work hard to complement Mjöll’s multiple vocal guises. Go’s fretwork stabs precise holes when Mjöll is sugary-sweet and then provides a necessary crunch to bolster the cheerleader’s rabble-rousing. Dream Wife’s staying power, however, lies in their triangular chemistry. The masterful punch’n’groove of Bella Podpadec’s bass work - which holds the whole thing together - musn’t be overlooked. Her ability to translate and propel rhythm is even more impressive considering that, as the story goes, she picked up a bass for the first time when the band was in its art school infancy.

The strident ‘Rebel Rebel’-esque stomp of ‘Hey Heartbreaker’ finds Dream Wife back at what feels like their most comfortable sweet spot: danceable, a bit glam, and with the handclaps and “hey, hey, hey!”s that would make them a hit at a drag night as well as an indie dancefloor.

Despite Mjöll’s threat that she’ll “fuck you up” on the breakneck punk of ‘F.U.U.’, Dream Wife won’t punish you if you aren’t familiar with its varied sonic influences. A large part of the band’s, and indeed this album’s, strength lies in their confidence to explore and celebrate femininity in all its forms. The inconsequential fun of timeless indie pop and the disruptiveness and snarl of the riot grrrl movement are all deftly wrapped up in the aesthetic gloss of witchy sensuality, primary colours and sass. While Dream Wife definitely know their shit, you know that they would welcome you with open arms if you wanted to join their gang.

Dream Wife neither tempers its messaging, nor fears its own accessibility and inclusivity. While most artists would dread having to juggle the pressure to hit the mark, plus the weight of their legendary influences, Dream Wife have delivered an album that is refreshing in its clarity, its simplicity and its runaway quality.