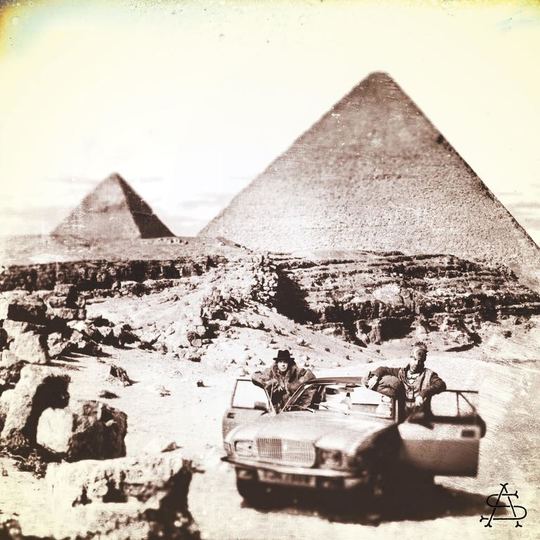 Steve Mason is back on track. After a few years wandering in the musical wilderness he’s back to his sardonic best. Last year’s Meet the Humans was some of the strongest music he’d written in over decade. It showcased his ability to turn a phrase and write a killer melody wasn’t a thing of the past. Nor was his ability to put on a mesmerising, and transfixing, live show. Now he has joined forces with Martin Duffy, who has one of the most impressive resumes of the last 20 years, to form Alien Stadium. This is the supergroup you’ve been waiting for, but never knew you needed.

Their debut release, the mini-album Livin' in Elizabethan Times, is just under half an hour long and is loosely based on an alien invasion/first contact situation. It sounds like War of the Worlds, by way of Tim Burton's Mars Attacks!. Its opening track ‘This One’s for the Humans’ is a scathing attack on everything we admire about ourselves, and a few things we don’t. “This one’s for the humans, you don’t know who you are. This one’s for the humans, you’ve fallen off your only star”. As you can probably tell Alien Stadium aren’t pulling any punches, with an even more biting chorus “So this is for the humans, a message to you all, send your best among us, we will watch you fall”. Next up is ‘The Visitation’. As with it predecessor, the lyrics are a tour de force, but they are laced with some of the best jokes in Mason’s career to date. Lyrically the song is a call and response from the alien invaders and, us, the earthlings. “We don’t know just what you have seen, Maybe the Austin Allegro was a really bad dream, But we promise to change all our ways if you spare us from the old death ray” is followed up with the chorus of “Your leaders are arseholes, your science is crap, and just for the record your planet IS flat, we hate your religions, your food is too weak, your language confusing, your far from unique, DIE DIE DIE DIE DIE DIE DIE”. Musically it follows on from ‘This One’s for the Humans’, driving drums, chugging guitars, all seamlessly mix together with electro flourishes.

The remaining two tracks, ‘The Moon is Not Your Friend’ and ‘Titanic Dance (Lynch Mob Mix)’ almost flow into each other seamlessly and close the release perfectly.. The former is the most laidback track on the mini-album. It feels like the humans have given up hope and are settling into their doomed fate. There is a hypnotic, jazz, fairground vibe to the proceedings that is juxtaposed perfectly with the wry lyrics. The mini-album closes with the dancey/acid house tinged vibes of ‘Titanic Dance’ and adds some hope to a the humans plight with lyrics like “com an’ have a go, you’ll never take us alive!” This is the soundtrack to the disco at the end of the universe.

Livin' in Elizabethan Times is 28 minutes of big dumb fun. Big dumb fun with a great concept. Each song is full of hilarious deadpan lyrics, delivered like only Mason knows how, intricate composition that showcase both Mason’s and Duffy’s skill and prowess. If this is a one off, then we’ve been given something special, if this is the first instalment in a series of releases, then we’re in real treat.