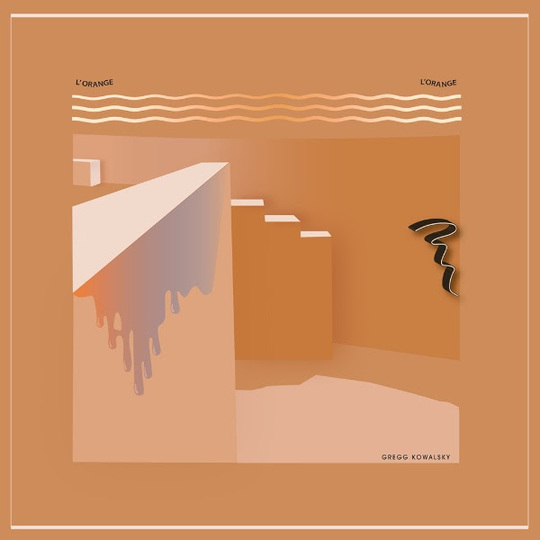 Like magical realism, the key signifiers of ambience are invariably opaque: as a genre, it thrives on ambiguity, haze, distortion, the 'undecidable', the inversion of assumed values. Light, where permitted, may only be dusky or twilit, carved out in anaemic shards of an otherwise pitch-black or cobalt totality. It may not be bright or, heaven forbid, sunny. It should not conjure Miami or California. Beyond all else, the ambient record denotes the absence of certainty, a precious world outside our own built from spiderwebs and choral loops. With L’Orange, L’Orange, Gregg Kowalsky compromises all our prose about misty forests and abandoned skyscrapers. It is incandescent.

'I made a blissful record, and that’s not usually what I do,' the artist confesses in the accompanying notes, and it’s hard to argue: previous outings Tape Hiss and Through the Cardial Window found an artist preoccupied with darker landscapes, the performative elements that ambience traditionally signposts from and towards. He points to the more minimal exertions of krautrock, from Roedelius to Cluster, and there is a faint but traceable genealogy. Unlike those forebears, though, Kowalsky’s newer work cares little for repetition or (as on Tape Hiss) drone patterns; from the initial cascading synths of ‘L’Ambient, L’Orange’, it’s clear that the album is more bent on dynamism than enchanting stasis.

Crucially, nothing here feels remote or haunted. Even the record’s more ethereal elements, such as ‘Maliblue Dream Sequence’, evoke a sense of waking up rather than dreaming, the kind of visceral rebirth you experience from waking up on a bright Sunday morning without a hangover. (Elsewhere my scribbled notes for ‘Tuned to Monochrome’ read ‘higher echelon alarm clock’, and I’m pleased to report that this still seems to the most apt description.) There are no drum machines here, nothing motorik or metallic to chill the skin. Later in the record there is an improvised piano piece, made all the more lovely by the fact that Kowalsky admits he can’t really play the piano. Like everything on L’Orange, L’Orange, the performance carries a naivety that only adds to the record’s stirring sense of innocence.

Kowalsky never summons the piece to ecstasy, but perhaps that would miss the point. The concept of otherness in music has always belonged to the evening, the realm of dark pleasures and unspoken sadnesses, captured only in fragments between radio static on late-night drives. In 2017, it feels sufficient balm to be presented with a record that cares only for possibility. 'People don’t have to be sad and exhausted all the time to prove they care about the things you care about,' Ashley C. Ford wrote this week. 'Human misery doesn’t fuel the Progressive Machine. We can have moments of levity. We can have joy.' We should reclaim the levity of those mornings, because everything we fight and drink and argue for in the night-time begins again there.