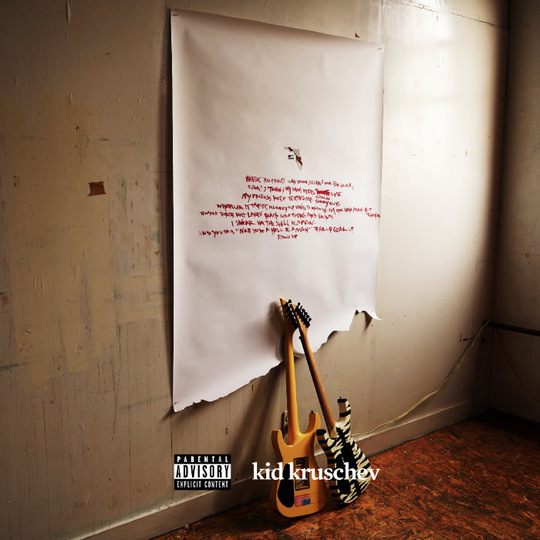 1. No repeat, no redemption

Time does play tricks on the static. Drive the same route, report to the same museum, return to the same empty apartment. Nothing changes, but also everything changes – buildings crumble, bridges collapse, trees disappear. Funny, how in a city you can measure the stride of time by what falls away. This time last year, the dynamic pop duo Sleigh Bells stunned the listening masses with their fourth album Jessica Rabbit, a cathedral-sized masterpiece of majestic bangers; and folks gave me grief for my pedal-to-the-metal review, but fuck me, I needed the adrenaline. Now, after what seems like hardly a 3-hour cruise down the interstate, Alexis Krauss and Derek Miller have returned, to such a similar state of mind that time itself has been blasted off the landscape. I’d hate to write off Kid Kruschev as just Jessica Rabbit 1 1/2, but so we have it: all that’s changed is what’s been removed.

As a 'mini-album', Kid Kruschev contains all the bubblegum pyrotechnics that Sleigh Bells perfected last year; the whole barrage only runs just shy of 30 minutes. In the process, Krauss and Miller evoke plenty of the tricks and weaponry that made Jessica Rabbit so explosive – ‘Panic Drills’, for instance, features so many startled gasps and oversized guitar slides that I often misplace its memory as an older tune. And just as the last album also shimmered with softer interludes, so Kid Kruschev also includes ‘Florida Rainstorm’, another acoustic torch song to separate the blasts. Of course, who can blame them for recycling old bombshells when the impact can still level entire gas stations to rubble? ‘Show Me the Door’, in particular, fuses four-to-the-floor kick action seamlessly with casual club cool; ‘Rainmaker’ pounds an acid house beat into submission. Pop music hardly ever slams this hard without the aid of a vindictive DJ – but for Sleigh Bells, wrecking ball force is simply the norm, aimed directly at the unsuspecting listener.

Time does play tricks on the static. Return to the same empty apartment, sit up on the same bed, jot into the same notepads. Nothing changes, and then a single thread of thought disrupts the weave – and before long, you wonder how you ever saw the world without that single thread. Funny, how in a mind you can measure the stride of time by what falls away. When the dynamic pop duo Sleigh Bells last left us, the Horror had only just seized this nation; the true nature of its reign had yet to reveal itself. Alexis Krauss has never strained her powerhouse vocals toward the explicitly political, or indeed any explicit point at all – but her signature wariness seemed particularly razor-honed on Kid Kruschev, once again sidestepping romance to approach rougher subjects.

See, you take a deeper dive with this mini-album, and Krauss opens the door a bit wider for your prying eyes to peer through. ‘Panic Drills’ and ‘And Saints’ both allude to the death of a father, and how that trauma seeped into her life: ”delivery guy wants to know if I’m OK. Though she plows through the matter with all the gusto of Katy Perry, ‘And Saints’ exposes Krauss at her weakest moments, with a blunt honesty that elides the picturesque. Elsewhere, one could easily question if ‘Rainmaker’ describes a simple doomed relationship, or a trickier situation with an abuser: ”I tried so hard to please you, you’re the rainmaker / but it was never really meant to be. Without any obvious signifiers, Kid Kruschev could resonate for many other voices – which, granted, was also true for Jessica Rabbit, but still satisfying. And while Sleigh Bells deliver no knockout punch this time around, don’t let your guard down, or else -