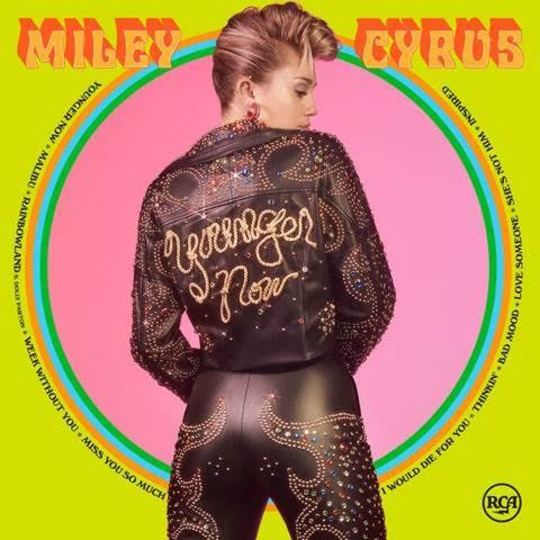 It is testament to Miley Cyrus’ sheer force of character that she has entered into this latest act in a recent career defined by shape-shifting with apparent seamlessness. As much as she is by no stretch of the imagination the first child star to adopt a deliberately risqué persona in order to put clear blue water between her adult self and her squeaky-clean past, Cyrus did it with an approach that was at best scattergun and at worst, gratuitous in its scandal-making - twerking on twice-her-age rape culture apologist Robin Thicke at the MTV VMAs, appearing nude in the video for ‘Wrecking Ball’ in a move she’s already voiced regret over, and developing a curious propensity for tongue protraction that Gene Simmons would be proud of.

There was also her dalliance with The Flaming Lips, born of a friendship with Wayne Coyne and culminating in Miley Cyrus and Her Dead Petz, an awkward 23-track tribute of sorts to the band that heavily featured its members and ultimately came across as a pretty hollow hodgepodge of all the things that Cyrus thought, superficially, ought to make a good Flaming Lips record, seemingly forgetting that their greatest abilities have always been in melody, atmosphere and production. Cyrus’ involvement with the group puzzled the alternative music world but, in truth, there didn’t seem to be any more to it than the explanation Coyne once gave when asked why the actress Heather Graham had been spotted at one of their shows: 'I guess because she takes a lot of drugs and listens to music - isn’t that how we get all our Flaming Lips fans?'

Most artists who had removed themselves quite so dramatically from the family-friendliness with which they made their name probably would have been laughed out of the proverbial room if they’d released as their comeback single a love song as straightforward and bereft of anything potentially controversial as ‘Malibu’, as Cyrus did back in May. In the event, though, it was fairly well-received, and there was perhaps a sense that her genuinely impressive vocals had taken a back seat to the circus that the Bangerz era became. This was not least because flashes of it were starting to emerge again; her powerhouse take on ‘Silent Night’ was the highlight of Bill Murray’s admittedly rubbish Netflix special A Very Murray Christmas, and her appearance at June’s One Love Manchester concert went down well, too.

Plus, the reversion to the country-pop climes of her earlier career on Younger Now should play to the strengths that she showcased in a series of YouTube cover videos in 2012, The Backyard Sessions, which demonstrated not just that her voice suits the likes of ‘Jolene’ and ‘Lilac Wine’, but in fact that she is obviously genuinely steeped in the country tradition. You wonder, incidentally, whether or not the fact that this particular genre is popular primarily with the more puritanical side of America’s population lent extra venom to the backlash when she left it behind to chase outrage.

It is within this framework that Cyrus’ best work is likely to materialise in future. It is not, however, manifested in Younger Now. This is a thumpingly disappointing and consistently milquetoast set of songs riddled with lyrical banality, done-to-death melodies and wispily thin production. The old-timey guitars and record-player scratchiness that precede the opening title track are promising, if affected, but they quickly give way to garish chart-pop. There’s a decent folk-pop ode to separation anxiety buried somewhere within ‘Week Without You’, but you’d have to get past the clanging effects laid over the guitars and vocals first.

On the back half of the record, Cyrus dramatically cedes ground to current pop trends; ‘Bad Mood’ comes with a thumping beat and a style of delivery that leans closer to R&B than anything else, and the same can be said for ‘Love Someone’ and ‘Thinkin’, which are glossed over with an incredibly slight coat of standard-issue country gloss but otherwise seem like an enormous concession to the fans that Cyrus picked up with Bangerz, even if they are considerably more demure in their lyrical outlook. You certainly can’t imagine her hero, Dolly Parton, trying her hand at that sort of thing, and when she does show up on the album, on ‘Rainbowland’, it’s much closer to the sort of trad-country fare that would have served Cyrus best if she’d adopted it throughout; still, though, the noisy, cluttered production hampers it.

Unsurprisingly, Younger Now’s standouts are the tracks that give Cyrus’ voice the biggest platform, ‘I Would Die for You’ and ‘Inspired’. Neither are earth-shattering, but the latter in particular has the rich country feel that the album as a whole sorely lacks, and when you hear her vocally soar as she does there, you realise what a genuine crime it is that her talents have been utterly squandered on the rest of the record. The artwork for Younger Now harks back to classic country artwork of the Sixties, and it’s a strong contender for the year’s most misleading artwork - this is not a country LP, but instead commercial thin gruel that barely masquerades as something more befitting the genre that Cyrus cut her teeth on. The death of Tom Petty three days after its release saw her deliver a gorgeous rendition of ‘Wildflowers’ with her dad on The Tonight Show - providing further proof that she can be really very good at this when she wants to be, and making Younger Now’s profligacy all the more baffling, but no less frustrating.