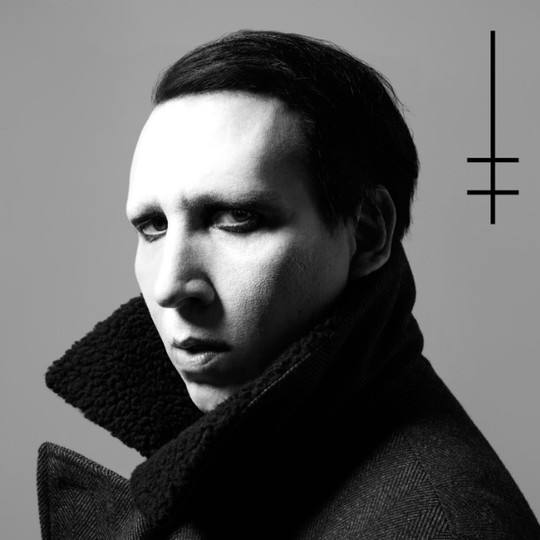 Has there ever been a more perfect rock star than Marilyn Manson? In the post-Cold War/ pre-9/11 mid-Nineties, he made himself the great existential threat to American society. A veiny, pale-eyed transvestite witch-man, come to take away your children. No-one was sure if he was the 'god of fuck' or Paul from The Wonder Years; nonetheless he terrified parents across the United States by pushing himself as Ziggy Stardust, the Thin White Duke and Pierrot the Clown crossed with the Child Catcher from Chitty Chitty Bang Bang. It was a genius plan. While his manifesto of 'guns, god and government' didn’t seem that powerful in the UK (where those three things are largely ignored), across the pond he became a one-man moral panic, and with the double punch of Antichrist Superstar and Mechanical Animals, he had the tunes to back it up.

But that was then, and this is now. The twenty-first century has done much to diminish Manson’s power, as American parents found far more to be scared of than a cartoon satanist in a silk slip. He didn’t help himself by continually re-writing ‘The Beautiful People’ (‘Rock is Dead’, ‘Fight Song’, ‘Mobscene’) and releasing increasingly more obvious covers of British synthpop classics either. What felt fresh with ‘Sweet Dreams’ in 1994 felt tired and predictable by ‘Personal Jesus’, a decade later. If you’ve lost track of new Marilyn Manson releases in the last ten years, then you’re not alone and you’re not missing much.

That changed with 2015’s rather fine The Pale Emperor and the arrival of collaborator Tyler Bates, who seemed to understand Manson’s knack for big glam hooks and twisted goth. Heaven Upside Down, Manson’s tenth album, is again helmed by Bates, and again the formula is working.

Opener ‘Revelation12’ is quintessential Marilyn Manson, running the full Antichrist Superstar formula of super-fuzzed industrial guitar, distorted vocal and anthemic satanism; a blood relation to 1996’s ‘Irresponsible Hate Anthem’. That bass-heavy, rolling groove continues on ‘Tattooed In Reverse’ and ‘WE KNOW WHERE YOU FUCKING LIVE’, and later on ‘JE$ CRI$’, providing a gritted road for the album to crunch along. Manson’s Bowie-obsession is out in force in the choruses too, ‘Say10’, ‘JE$ CRI$’ and the title track are all doozys, and ‘WE KNOW WHERE YOU FUCKING LIVE’ really earns those capital letters.

If Heaven Upside Down opens like Antichrist Superstar, its close could come from Mechanical Animals. ‘Threats Of Romance’ folds Bowie’s entire glam-era into a neatly yearning, spiky package- It’s one of the best things Manson has done in years.

Fans of Brian’s under-appreciated fondness for a pun will be pleased to know his sense of humour is fully functioning here, elevating the record considerably above much of his post-Millennium output. He knows exactly what he’s doing when he screams “You say God and I say ‘Say 10’”, “so fuck your bible and your belt” (or possibly "babble”, it’s slightly unclear) is a killer opening line and “I write songs to fight and to fuck to/ If you don’t to fight I will fuck you” is a textbook, if slightly uncomfortable nihilistic earworm. The line “What’s a nice place like you, doing around people like us” is one of his best.

Elsewhere, this is a record guilty of many of Manson’s standard mis-steps. The release was held back to make sure the newer ‘Saturnalia’ could be included, and every one of its eight minutes is boring. ‘KILL4ME’ sounds like something Muse discarded, and dark ballad ‘Blood Honey’ follows an intro that rips off Linkin Park’s ‘In the End’ with a song containing about half the drama and twice the whining.

We’re unlikely to see the power or the passion of Manson’s classic run again - it’s very difficult to bottle lightning twice - and you shouldn’t come to Heaven Upside Down expecting anything as textured, interesting or frightening as those early releases. That said, the artist known to his mum as Brian Warner seems to have settled after many years of free-fall. In Tyler Bates he has found a collaborator who knows how to get the best from his twisted mind. It’s business as usual, but after a decade of disappointment, it’s good to know business is doing well.