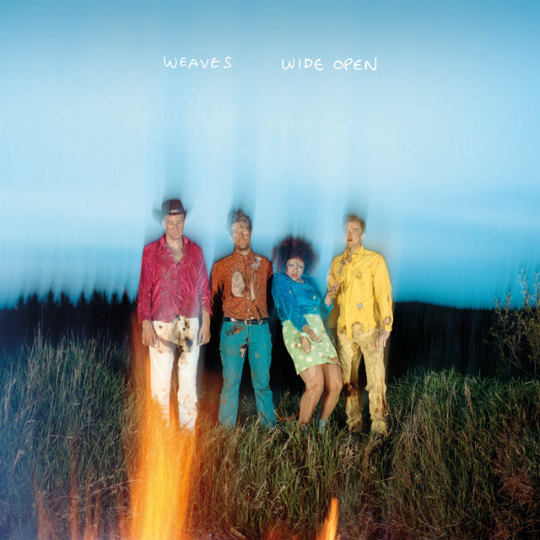 Even now, as I try to touch on alley-oop follow-up Wide Open, I can’t, really. But this time, it’s not because my critical senses have been crushed by mayhem and lust, twisted and softened by sweet chugs of wine into desperate fits. No, Weaves have tightened up, stowed away the bottles and rockets, and unfolded designs upon the lawn. It’s funny – I’d been holding off this review for days, shelved the album, let other projects steal pieces of my heart, and blamed myself for the dry spell. And maybe I’m to blame, sure. But Wide Open simply doesn’t explode in the same way as the debut; while Burke remains the jumble of nerves that I love and relate to so deeply, she’s surrounded by a more stable outfit, one less willing to expand and more content to contract.

Contract? I frame that cruelly. At the heart is a heart, of a once shy and precocious protagonist who now stares in the mirror and wrestles between total swagger and self-deprecating doubt. Took me a few spins to sift out this sly parallel between the Gary Glitter stomp of ‘Slicked’ and the more hushed cruise of ‘Gasoline’, but it’s there, and sums up Weaves’ charm in a nutshell. In the former, Burke admires her gussied-up look before heading out for the night – “look in the mirror, that is you”, she tells herself, likely with Fonzi-esque finger guns; whereas in the latter, she wakes in an existential fog, doubting her job, her purpose, and her very reflection: “maybe I look, don’t maybe I look, don’t maybe I see / another over there” . And Burke’s not even trying to be clever here – these are just open confessions of her ego’s own flighty nature, which just sound all the more earnest within the euphoric disguise of rock n’ roll.

Indeed, Weaves showcase their accidental genius the most on their sneakiest and most contradictory of statements, ‘Scream’. Spencer Cole’s slinky drums and guest demon Tanya Tagaq’s growls suggest some secret and kinky party, but Burke explores a pulpy mess of observations, wherein qualms about the modern age splatter against personal angst: “I’m a child of commercials and body language and floating drones”. Assurance squashes against doubt, suggestive phrases squeeze against serious wisdom (the way Tagaq gasps after Burke says “I am beautiful, I am sublime, I am looking for fresh watermelons” is absolutely brilliant). Without too much cerebral effort, Weaves have boiled down the complexity of staying positive (and sexy) in these baffling times, and the whole mélange is utterly arresting.

Sadly, though, that is the peak. ‘#53’ kicks the whole ordeal out with a swoon of Springsteen-esque spectacle, on the totally empathetic subject of letting go, and that sums ups what follows succinctly. Wide Open often chugs along with classic rock competency on timeless yet well-tread scenes trails to romance – both ‘Grass’ and ‘Walkaway’ ring to the dearly departed Tom Petty, eschewing flammable flair for stabilized verse-chorus tanks. At least Burke subverts the Who-ish bulk of ‘La La’ with that candid mix of frail and bold confessional that she projects so sincerely, conveying the mighty sense of validation that comes from finally finding yr niche after years of standing out.

All in all, Wide Open demonstrates a band in transition. Methinks, overall, Burke and her motley crew are headed the right way in their conflicted and thus accurate portrayal of our tangled ids, egos, and libidos. But if Weaves could just pair that again with more of that aural entropy from last year… well, maybe I’m just selfish and conflicted myself. I just don’t want that fire to fade in these guys, and I just fear I’ve taken this long to finish this review because I can’t feel the flames pressed so close.