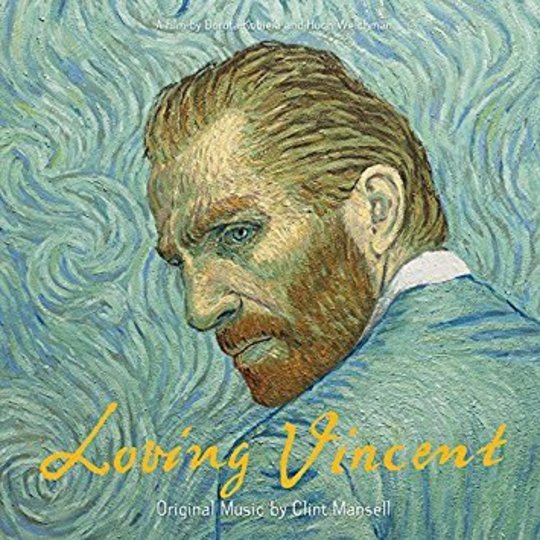 Scored by Clint Mansell, Loving Vincent is the soundtrack to an animated biography by directors Dorota Kobiela and Hugh Welchman. The film focuses on the events surrounding the painters death. Adapting to this sombre theme, the soundtrack begins with slow sustained notes on string instruments. With its resonant tones, opening track ‘The Night Café’ evokes the dark shadows of an unlit urban alley, where an unhinged Vincent staggers the streets, tormented by insomnia, until the first prickles of morning sun.

The following tracks reveal continual modulations of mood and pace. At the outset, the second track ‘The Yellow House’ applies a kind of intensifying patterning we are familiar with from listening to other minimalist composers, notably Philip Glass. To develop the sense of drama, sustained and repetitive strings contrast with melodic sequences, drawing out the contradictions of the short and difficult life lived by Van Gough, and the sacred art he represents. ‘At Eternity’s Gate’ features more dulcet tones which brightens up the mood. ‘Portrait of Armand Roulin’ continues with the intense strings and introduces a choral section, the first time that we hear any vocals on the soundtrack. The soaring effect of this bittersweet track is both elegiac and sacred, it gives a sense of some great loss or sacrifice that will benefit future generations.

The sound mellows with the track ‘Marguerite Gachet At The Piano’, while ‘Still Life With A Glass of Asinthe and A Carafe’ evokes tension through the contrast of elegiac strings and staccato plucking at a higher pitch. In the track ‘Blossoming Chestnut Trees’ you can hear some of the signature motifs of a Clint Mansell soundtrack, certainly the triplet note patterns over the sustained string sections remind the listener of his other work, specifically Requiem for a Dream.

I think one of the defining features of this collection is its sense of continuity, which must synchronise well with the animation– unravelling the film in 65,000 hand painted frames, so like an style is like that of a Van Gogh painting. All the names of the songs are derived from the names of paintings, giving them a visual and emotional reference which distinguishes them throughout the narrative.

‘Starry Night’ sung by Lianne La Havas is the album’s only ballad. It is very poetic but retains a kind of soundtrack warmth, mostly projected by La Havas voice, the graphic lyrics, and pared back accompaniment, “Flaming flowers that brightly blaze, swirling clouds in violet haze, reflect in Vincent’s eyes of china blue; colours changing hue; morning fields of amber grey, weathered faces lined in pain are soothed beneath the artist’s loving hand”.