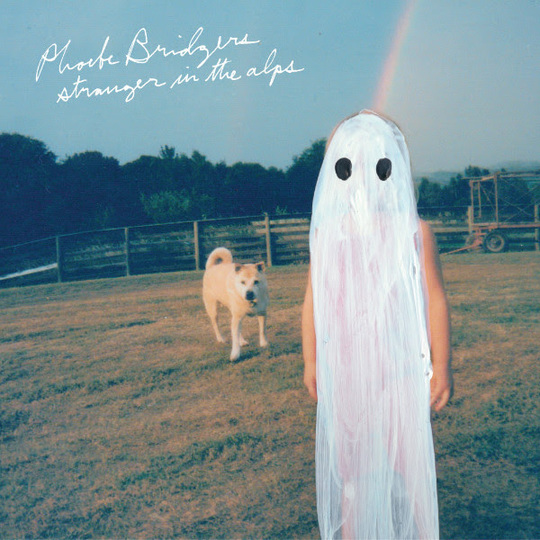 ‘Smoke Signals’, the first song on 22-year-old LA singer-songwriter Phoebe Bridgers’ debut album, is a gorgeous piece of music. It is sad and ruminative yet comforting, too; sharp and specific in its allusions yet universal regards its central theme, of human connection blurred by distance, time, chaos and memory.

Upon its release in January of this year it marked Bridgers' coming into her own, striking out powerfully with something unique that absolutely fulfilled the promise of her earlier material, beautifully setting the tone for Stranger in the Alps. (Said material saw her dabble in various styles, from indie-rock power-balladeering to more straightforward confessional fare, and the results - also encompassing a 7” produced by Ryan Adams and released on his PAX-AM label, two songs from which are repurposed here - remain very fine in their own right.)


But Stranger… is where it all comes together, a bracing, intimate listen, more often than not deriving its impact from an admirable sense of restraint. Bridgers is blessed with a set of vocal cords capable of bringing the house down, yet she rarely does so. There’s a moment towards the end of the shimmering, infectious ’Motion Sickness’ that ramps up the volume - likewise in ‘Georgia’, one of Bridgers’ earlier compositions - but for the most part this set revels in subtle electronic flourishes, keys, chiming guitars and gentle reverb that prop up Bridgers’ gift for melody and memorable images.

A bright, autumnal melancholy suffuses the Neil Young-ish shuffle of ‘Scott Street’, the song eventually breaking into a sun-dappled outro wherein Bridgers puts a cap on an awkward reunion via the repeated lyric “Anyway, don’t be a stranger,” and even the desperation underlying ‘Demi Moore’ (jokingly christened ‘The Sexting Song’ by the singer and actually named for a misheard lyric) is leavened by Bridgers’ closing proclamation that she has “a good feeling” - albeit one she’s quick to note “doesn’t happen very often.”

‘Funeral’ is of a piece with the matter-of-fact, stream-of-consciousness style Mark Kozelek has deployed so frequently of late, while Conor Oberst duets on penultimate tune ‘Would You Rather’, his increasingly reedy, craggy presence coalescing perfectly with Bridgers’ hushed, softer tones. Now something of an elder statesman on the scene, Oberst, alongside Ryan Adams, has been a vocal supporter of the singer for a while now, and Bridgers makes no secret of her love for folk music and singers like Kozelek and Elliott Smith (named as a major formative influence). She has toured and become friends with Julien Baker, another singer who mines heartbreak, youth and identity crises in her music, the pair fashioning introspection into something galvanising and direct as opposed to self-pitying or maudlin, in much the same way as Bright Eyes, Rilo Kiley and the rest of Oberst’s erstwhile Saddle Creek cohorts did some 15 years ago - and acts like Waxahatchee, Hop Along and Big Thief do so today.


Bridgers closes proceedings with a cover of Mark Kozelek and Jimmy LaValle’s ‘You Missed My Heart’, from their tremendous 2013 collaborative LP Perils from the Sea. A sordid fever dream of violence and assault that wrestles beauty and profundity from its bleak narrative, the song finds the Sun Kil Moon man at the peak of his storytelling powers. Bridgers’ version is remarkable: she makes very few changes, slowing down the melody and substituting the original’s brittle electronica for lambent keys and backing vocals, but the tenderness with which her delivery imbues Kozelek’s verses makes it something genuinely transcendental.

Some songs come close, but none hit quite as hard as Stranger in the Alps’ haunting bookends. All the same, the record is a stunning achievement, and one that heralds the arrival of a major talent, undoubtedly in it for the long haul. Even more importantly, it feels special in an intangible way that I’m at something of a loss to explain. No matter, though: if you’re a particular type of music fan – one that has read this far, for example, is reading this website, and relates to the music of some of the artists mentioned in this review – I’m sure you’ll know precisely where I’m coming from.